"Big, simple and economical, the Peugeot Traveller is a sensible choice for comfortable group travel" 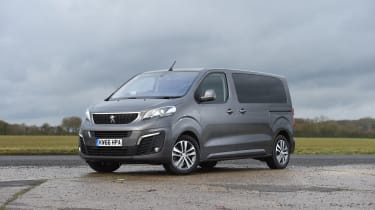 Like SUVs, MPVs are offered in all kinds of shapes and sizes. Peugeot will sell you anything from the small, utilitarian, van-based Peugeot Rifter to the larger, more sophisticated Peugeot 5008, which has the look of an SUV but is a seven-seat MPV at heart. But if you have even more people to transport, there’s the Peugeot Traveller, the recently introduced replacement for the ageing Peugeot Expert Teepee.

The Volkswagen Caravelle and Mercedes V-Class can both carry up to eight passengers and the Traveller is a credible rival to either. Inside and out it’s almost identical to the Citroen SpaceTourer and Toyota ProAce Verso, which isn’t surprising, as all three come from the same production line. And in common with the Volkswagen and Mercedes above, all three are based on vans, too.

That may not seem very upmarket, but in fact it makes a lot of sense. A van is designed to offer as much interior space as possible and that leads to cars like the Traveller providing generous accommodation for large groups of passengers. All occupants can stretch out in some comfort and there’s an extended wheelbase version that offers even more room. The longer model also maximises luggage space behind the third row of seats.

Most importantly, vans are expected to work for a living, while generating a profit for their commercial users, so they have to be cheap to run. The 2.0-litre 148bhp diesel engine of the Traveller is a well proven design that’s claimed to return 53.3mpg, together with a sensible 139g/km of CO2.

Compared to its Citroen and Toyota stablemates, the Peugeot is positioned a little way upmarket – there’s no economy-priced basic model. Every Traveller is pretty well equipped, with climate control, cruise control, Bluetooth and a seven-inch infotainment screen even on the least expensive Active model. Go for Allure and you get heated leather seats, a panoramic sunroof, xenon headlamps and a heads-up display for driver convenience. Sat nav remains optional, though.

You wouldn’t expect something as long and wide as the Traveller to feel like a sports car, but it doesn’t feel as bulky or intimidating as you might expect. It’s actually surprisingly nimble, so crowded urban streets can be tackled with confidence. Also adding to driver confidence is the Traveller’s five-star Euro NCAP safety rating, with a particularly high score for protecting children in an impact.

In all likelihood, the Peugeot Traveller will be too bulky for family use, unless eight seats are essential. However, a larger family will find the big Peugeot a comfortable, flexible and economical way of travelling together in safety.

One way the Peugeot Traveller betrays its commercial-vehicle origins is in its running costs – they’re low enough not to look too bad on a profit-and-loss spreadsheet. This is excellent news for those who plan to use a Traveller for private hire or executive transport, but it’s equally relevant if the car is to be a workhorse for a large family.

The engine range is shared with the Citroen SpaceTourer and Toyota ProAce Verso, and its most economical member – the BlueHDi 115 with stop-start technology – can achieve 55.4mpg.

Those who want a little more power should plump for the BlueHDi 150, which can still return 53.3mpg, but the markedly less powerful BlueHDi 95 has to work harder, so it only returns 51.4mpg. A six-speed automatic gearbox is available on the BlueHDi 180, which returns just under 50mpg. Servicing can be carried out by any Peugeot dealer and is unlikely to cost significantly more than for a diesel Peugeot family car. The three-year warranty will be the same, too.

CO2 outputs place most models of Traveller in the £130 annual road-tax bracket, but bear in mind that any example registered on or after 1 April 2017 will cost a flat rate of £140 a year – or £450 for the first five years if its specification brings its cost to £40,000 or more.

Surprisingly easy to drive, but Traveller’s size and weight dictate how it performs

On paper, the BlueHDi 95 looks worryingly sluggish – 0-62mph takes 15.9 seconds, and it’ll barely crack 90mph. However, in mostly urban driving this may well be plenty – a lot of commercial vans are no faster than this, but can still seem nippy in traffic. More powerful models will be a lot more relaxing to drive, though. The BlueHDi 115 shaves 2.5 seconds off that acceleration time and increases the top speed to 99mph – while the addition of a sixth gear should make it feel happier on the motorway.

The 148bhp 2.0-litre diesel comes close to feeling car-like, with strong pull through the gears, although overall acceleration of 0-62mph in 11 seconds won’t match most modern family cars. This engine also uses the six-speed manual gearbox, which we found rather ponderous and imprecise in use.

The steering is similarly vague and you can tell it’s low-geared to reduce driver effort. The Traveller’s turning circle is tight, though, so manoeuvring in city streets isn’t as hard work as you might expect. The ride is comfortable, too. Venture onto country roads and speed up a bit and the Traveller handles surprisingly well – although you’re always aware that you’re driving a big, heavy vehicle.

Plenty of equipment and passengers are well looked after

Passengers in this kind of vehicle aren’t usually very concerned with such issues as running costs and performance – comfort is key to their satisfaction and it’s highly unlikely that they’ll be disappointed. 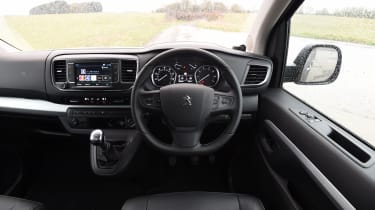 As a van-based vehicle, the Traveller has a simple and fairly upright driver’s environment, which the long-legged may find restrictive. The dashboard itself is smart if not the last word in cutting-edge design, while materials are solid and workmanlike.

The trim elsewhere inside – including the seats – doesn’t quite match the feeling of luxury provided by the more expensive Volkswagen Caravelle, but comfort is good and few passengers are likely to feel hard done by – although it’s a bit noisy inside and the huge interior can seem a bit echoey.

Plenty of space, as you’d expect – but not without compromises

This is the category where a jumbo MPV really sells itself, as well as laying its van-based roots well and truly bare. As you might expect, the Peugeot Traveller offers an immense amount of interior space. You can choose three lengths: standard long and compact (the latter with the least powerful 1.6-litre engine). 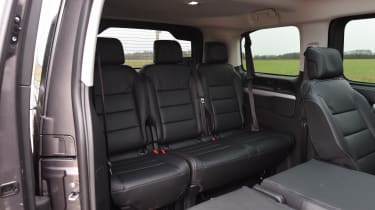 We haven’t sampled the compact model, but our standard-length Traveller could comfortably accommodate six-foot passengers in each of its three seating rows, while leaving space for 640 litres of luggage, even with all eight seats in use.

However, that load space is tall, wide and shallow – imagine the outline of a chequebook and you’ll get an idea of the shape of the boot. Bulky bags may need to be stored vertically. Plus, the seats are heavy and removing them isn’t easy, but if you need a truly vast carrying capacity, 3,200 litres can be unlocked by heaving them out – and that’s only measured to the window line. The long-wheelbase version promises even more space, but will be somewhat bulky to live with.

No operator of vans will want its fleet to suffer from excessive downtime and as such commercial vehicles are typically designed to have as few potential failure points as possible. With that in mind, much of the technology found under the metal of the Traveller is pretty simple and its engines have been proven with high mileages accumulated by van drivers all over Europe.

Neither of the Traveller’s sister models, the Citroen SpaceTourer and Toyota ProAce Verso, has yet made an appearance in our annual Driver Power owner satisfaction survey, but we hope they will as their popularity increases. Peugeot itself presently ranks 17th overall out of 32 manufactures surveyed, just above 16th-place Toyota and comfortably ahead of Citroen in 26th.

The Traveller’s safety is beyond any criticism, though. It holds a five-star rating from Euro NCAP, including an 87% score for adult passenger protection and an excellent 91% score for child protection. Thanks to autonomous emergency braking – which will apply the brakes if an oncoming hazard is detected – a 64% rating was given for pedestrian protection.

Lane-departure warning, road-sign recognition, blind-spot monitoring and a driver drowsiness monitor improve safety on long journeys – as does active cruise control, and these helped the Traveller to gain a 78% Euro NCAP rating for driver assistance.

The Peugeot Traveller is placed slightly differently to its Toyota Proace Verso and Citroen SpaceTourer sisters – both of those offer a lower-priced entry-level model that the Traveller range lacks. This has the effect of making the Peugeot appear a little expensive. Nor can you choose the Traveller with nine seats.

However, if thought of as an alternative to the Volkswagen Caravelle, the Traveller suddenly looks rather good value. A Caravelle specced equivalently to our Traveller Allure test car would have cost in excess of £40,000 – a figure that the Peugeot undercuts by almost £4,000. Meanwhile, the Mercedes V-Class is even more expensive, despite not really offering more accommodation.

The Traveller isn’t so cheap that it’s eighth seat comes for free against seven-seat rivals, though. A high-spec Citroen Grand C4 Picasso remains an extremely comfortable and well priced way to carry seven people, while a top-of the range Ford Galaxy Titanium X costs around the same and makes a real luxury express. 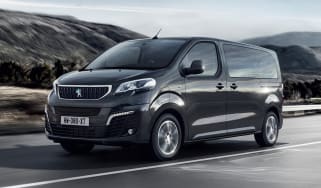 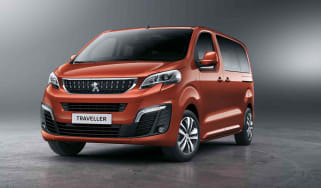 If carting cargo is your priority, our top 10 list of the biggest car boots is sure to be of interest, whatever your budget.
Peugeot Expert review 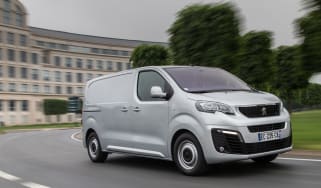 Peugeot's medium-sized van blends impressive economy with plenty of power, delivering comfort, convenience and a touch of style
Skip to ContentSkip to Footer