The Audi A4 is still a practical saloon, but doesn’t match newer rivals for passenger space

An older design means the Audi A4’s passenger space falls behind rivals’, although it’s still reasonable for this class. The boot is still one of the best in class, too. 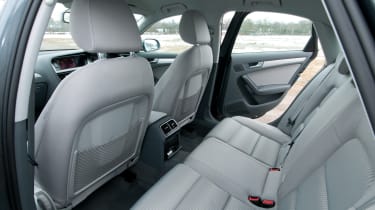 Passenger room and cubbyhole space in the Audi falls behind the Mercedes C-Class, which is the best car in this class for rear passenger legroom. The BMW 3 Series has more room in the back for passengers’ knees than the A4, while offering more headroom than the Mercedes. The Audi also lacks foot space for anyone sitting in the middle of the back seat, although it’s no worse than any of its rivals in this respect. Audi has given the A4 lots of useful cubbyholes, but the new Mercedes C-Class offers more storage room thanks to a bigger centre-console cubby. 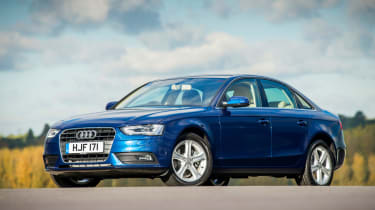 The Audi A4’s 490-litre boot is almost exactly the same size as those in the Mercedes C-Class and BMW 3 Series, both of which have a 480-litre boot. Choosing quattro four-wheel drive reduces space by about 10 litres. The Audi’s boot opening is not as large as the one in the BMW 3 Series, which makes loading items trickier. Also, like most saloons, the Audi has a tall boot lip that makes it more difficult to get heavy items in than a hatchback. The Audi is the only model of the three to offer folding rear seats as standard, although they only split 60:40, rather than 40:20:40 as they do in the BMW and Mercedes. 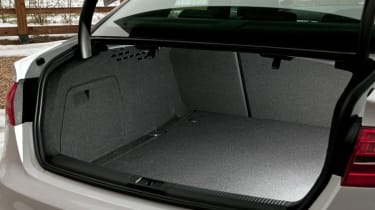 Maximum towing capacity in the Audi ranges from 1,500kg for the 1.8-litre two-wheel-drive petrol model, to an impressive 2,100kg for the 3.0-litre diesel fitted with quattro four-wheel drive.