"An excellent interior and great build quality make the A4 a good car, but it's starting to look a little out-of-date and will soon be replaced."

The Audi A4 saloon is a member of a trio of German saloon cars – the others being the BMW 3-Series and Mercedes C-Class – that are admired for their classy looks and premium image. In quality and price, they sit above mainstream models such as the Ford Mondeo and Vauxhall Insignia.

However, of the three, the A4 is the oldest and the only one that's front-wheel drive (the others are rear-wheel drive). And it's not only car enthusiasts who should be concerned about this difference, as it makes the A4 feel a little less sporty. That said, the A4 is also available with Audi's famous quattro four-wheel-drive system for extra grip on slippery roads.

As it's somewhat older than its main rivals, the A4 has been overtaken by them in the safety stakes (there's a wide range of optional safety kit, but most of it is very expensive). Although the Audi looks and feels well built, its reliability and customer satisfaction ratings are beginning to slide, too. 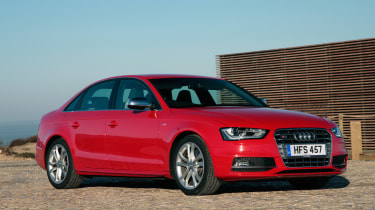 There are three petrol engines: a 1.8-litre offered in two different power outputs and a 2.0-litre available only with quattro four-wheel drive. Naturally, they're cheaper than the diesels, so you should consider whether your annual mileage justifies the extra expense of the latter.

More reviews for A4 saloon

If it does – around 15,000 miles or more should swing it – then you're in for a treat. The diesels are mainly 2.0-litre engines with a range of different power outputs and a choice of two or four-wheel drive. They're all smooth, powerful and very economical. The most efficient is the 2.0-litre TDI Ultra, which can do 67.3mpg and costs £20 a year to tax, yet still manages to get from 0-62mph in 8.3 seconds. At the other extreme is the 3.0-litre TDI, available only in the top-spec Black Edition Nav quattro. It returns a still-impressive 49.6mpg but sprints from 0-62mph in just 5.9 seconds.

The Audi A4 is available in four specifications: basic SE (aimed mainly at business users and with just one engine), mid-range SE Technik (our pick), S line and luxurious Black Edition Nav.

Equipment is generous, with the SE Technik featuring DAB digital radio, front and rear parking sensors, cruise control and sat nav. Even metallic paint is standard. Fortunately, this trim level also has the softer suspension and smaller alloy wheels. It might sound like an odd thing to boast about, but in fact this set-up is more comfortable than the sportier suspension and larger wheels fitted to the higher-spec models. Perhaps Audi realises this, since 'downgrading' to the regular suspension is a no-cost option.