The Audi A4 is safe and predictable to drive, but not as fun as a BMW 3 Series

As a driver’s car, the BMW 3 Series will always eclipse the Audi A4. Its rear-wheel-drive setup means the BMW can corner quicker and also stops the left-to-right tugging sensation in the steering wheel, known as torque steer. It occurs when accelerating from a standstill in a front-wheel-drive car. Fitting quattro four-wheel drive to your A4 solves this problem, but the four-wheel-drive BMW 3 Series xDrive remains the better driver’s car. 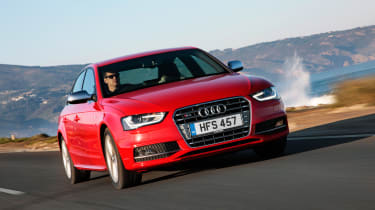 Having said all that, sophisticated front suspension ensures that the Audi A4 is still fun to drive and has plenty of grip in the corners. Suspension that errs on the stiff side reduces body lean. The Audi also offers a better manual gearbox than either the BMW or the Mercedes C-Class. If you choose an auto, go for the seven-speed S tronic option, which shifts quickly and smoothly. The Multitronic gearbox is as quick to change and harms fuel economy.

Despite offering the best fuel economy in the A4 range, the Ultra model can get from 0-62mph in just 8.3 seconds and acceleration at motorway speeds is also impressive. The 3.0-litre diesel engine’s 242bhp makes it even quicker – offering an excellent balance of speed and economy.

The 1.8-litre petrol is cheaper to buy and quicker than the basic diesel, with the most powerful manual version taking 8.1 seconds to get from 0-62mph, but fuel economy suffers. Fastest of all are the S4 and RS4 Avant estate, which cover 0-62mph in 5.0 and 4.7 seconds respectively. Even they don’t offer the driver involvement of performance saloons such as the BMW M3, however. But with quattro four-wheel drive coming as standard on both models, they could show the BMW a clean pair of heals on a slippery UK road. On balance, the S4 is the better car, but a roaring V8 soundtrack makes the RS4 Avant a tempting option if you can afford the aforementioned fuel bills.