Audi is a brand with a good reputation for build quality, and this ought to translate to strong reliability. Q3 also has an impressive range of standard safety equipment, with far more available at extra cost.

Similarly, the Audi Q3 was rated highly for reliability in our 2017 Driver Power owner satisfaction survey of cars currently on sale in the UK. Of the owners who responded, 14% reported experiencing a problem with their car at least once. The Q3's overall 13th place (out of 75)in the survey would have been higher if not for the distinctly average running costs on some models.

With a three-year/60,000-mile warranty, the Audi’s cover is not as good as that offered on cars from Kia and Hyundai, but it does include three years of breakdown cover. 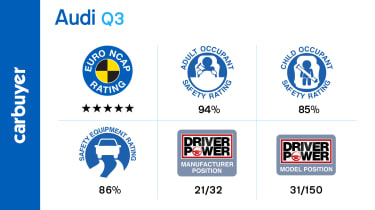 The Q3 also received a five-star rating when it was crash-tested by Euro NCAP. Standard safety features include electronic stability control, six airbags and ISOFIX child-seat mounts. Available safety options include a speed limiter and lane-keeping assistance (which keeps the car in its lane on the motorway with gentle steering inputs). You can also add hill-hold assistance (£90), hill-descent control (£195) and blind-spot monitoring (£450) for extra cost, along with rear side airbags for £300.