Along with some other small SUVs, the Nissan Qashqai trumps the Audi Q3 for running costs, but generally the Audi is relatively competitive in this respect. It's also superior to its rivals in some areas, so it really depends on what's most important to you.

One of those areas is resale value, where the premium Audi badge makes the Q3 particularly sought-after on the used-car market and ensures it holds on to a healthy percentage of its purchase price after a few years of ownership.

However, that desirability is also reflected in a high list price. The Q3 is very well made and has one of the best interiors in its class, but you do pay a premium for the Audi badge appeal.

The Q3 has a choice of two petrol engines (plus a third high-performance one in the RS) and two diesels. The 1.4-litre turbo is the more economical of the two petrols, capable of 51.4mpg while emitting as little as 127g/km of CO2.

The more powerful 2.0-litre petrol engine is less economical, partly because it’s larger and also because it’s only available with four-wheel drive. It comes in 176bhp quattro S tronic form only, but still manages a reasonable 42.8mpg and CO2 emissions of 152g/km. 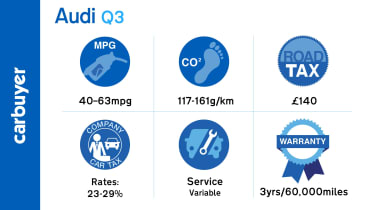 The diesels are powerful, but also more efficient than the petrols. The most frugal model in the Q3 range is the 148bhp 2.0-litre diesel. It returns 62.8mpg and CO2 emissions of 117g/km.

The quattro four-wheel-drive models have extra grip on slippery roads, but they use more fuel – the most economical Q3 quattro returns 57.6mpg. If you can stretch to it, we'd recommend the 181bhp 2.0-litre turbodiesel, as its extra power is useful and it's not hugely more expensive to run. It's capable of 54.3mpg in four-wheel-drive S tronic form with CO2 emissions of 136g/km. 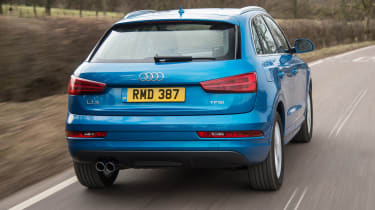 If you want a car that’s cheap to run, avoid the sporty RS Q3 and RS Q3 Performance models. They can get from 0-62mph in less than five seconds, but you won’t see better than 32.8mpg economy.

All Audi Q3s registered on or after 1 April 2017 will attract road tax of £140 a year, while those with a list price (including options) of more than £40,000 are liable for an additional surcharge of £310 a year for the first five years of ownership, bringing the annual bill to £450 during that period.

The various Q3 models fall into groups 22-29, although the most powerful petrol version (aside from the RS Q3) is in group 29. By way of example, the similarly sized 1.6-litre diesel Nissan Qashqai is in group 19. As with all other running costs, insurance for the RS Q3 models will be considerably more expensive.

For some higher-mileage drivers, a variable-interval service schedule allows the initial oil-change service to be delayed depending on readings taken by engine wear sensors. If the car spends a lot of time gently running on the motorway at sustained speeds, the mileage and time before the first oil-change can increase. However, the bi-annual (or 19,000-mile) inspection service is always fixed.

Although the Audi Q3 warranty has no mileage cap for the first two years, the third year has a limit of 60,000 miles, making it effectively a three-year/60,000-mile warranty. This is the same as Nissan’s warranty on the Qashqai, but shorter than the five-year cover that comes with the Hyundai Tucson and the seven years offered with the Kia Sportage. On the Q3, cover can be extended for an extra charge, to a four-year/75,000-mile or five-year/90,000-mile policy. Three years' roadside assistance is also provided.