“All the fun and drama of the Audi R8 coupe, but in open topped Spyder form.” 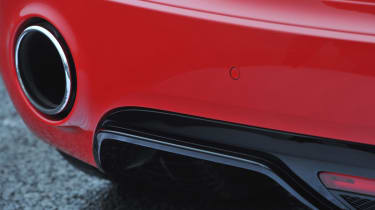 When Audi was developing the Audi R8 many doubted that the firm could build a car to compete with established rivals such as the Porsche 911, but they were wrong. The R8 is not only as much fun to drive as the Porsche but, pound-for-pound, its engines are more powerful and all models come with four-wheel drive for plenty of grip.

The Audi R8 Spyder builds on the R8 experience with a roof that can drop in seconds when the sun is out – it arguably looks even better as a convertible.

Buyers can choose between two powerful engines – a 4.2-litre V8 and a 5.2-litre V10. Both offer excellent performance, with many people preferring the V8. The V10 is the same engine that was used in the Lamborghini Gallardo, and by opting for the Plus model you get even more power.

The R8 is an expensive supercar, so even the base model gets 19-inch alloy wheels, sat-nav, climate control and leather seats, but it is easy to add thousands more to the price of the Audi R8 by ticking a few boxes on the options list.

You don’t buy an Audi R8 Spyder because you want a car that is cheap to run, and that’s just as well because the Audi has huge running costs. The V8 is slightly better on fuel than the V10; it’s capable of 19.9mpg compared to the V10’s 19mpg but in real life the difference is virtually nothing. Both models are in the highest band for road tax, which means you’ll be forking out £505 annually.

High running costs are a given, but part of the Audi R8’s appeal is that it gives the performance of a Ferrari with the huge Audi dealer network and while maintenance for the R8 won’t be cheap, it will be reasonable when compared to the R8’s rivals from Aston Martin, Porsche, Ferrari, McLaren and Maserati.

Its ample performance and poise is accessible to all

If you are looking for the ultimate Audi R8 Spyder then the Plus model is the one to go for. It gets a slightly stiffer set up for excellent cornering and also gets an extra 25bhp over the standard V10. That said, the V10 still has 525bhp and gets from 0-60mph in just 3.9 seconds.

All Audi R8 models are fun to drive thanks to a four-wheel drive system that allows the car to slide slightly but at the same time limits the chance of it spinning. Even the base V8 model can dispatch 0-60mph in 4.6 seconds, and is as fast most driving enthusiasts will ever want. We would however, spec the optional seven-speed automatic gearbox, which not only makes the R8 easier to drive in town, but also makes it quicker out on the open road.

With the roof down, you can hear the engine perfectly

Audi makes some of the nicest interiors in the automotive industry and the R8 has one of its best. It gets a sporty driver-focussed dashboard unlike anything else in the Audi range and is made from quality materials that make it feel extremely solid.

It may only have a folding fabric roof (rather than a better insulated metal one), but the Audi R8’s roof does an excellent job of keeping noise out of the interior and is only slightly noisier than the metal-roofed coupe. The roof drops at the touch of a button so you can hear the Audi’s excellent engines, or you can keep the roof up and lower the rear window.

Practicality was never meant to be an R8 strong point and in this regard it doesn’t surprise. It only gets a 100-litre boot, which will fit a couple of squashy bags at a push, but not much else. Audi will sell you tailored luggage that fits behind the seats, which might be handy if you’re planning weekends away. The cabin does have some useful cubbyholes and cupholders, even if space generally is at a premium.

Audi’s supercar is too much of a niche model to feature in our 2014 Driver Power owner-satisfaction survey, but the company finished quite strongly in our manufacturer’s standings to come 12th out of 33 firms. It scored highly for build quality and performance, but fell well behind BMW and Mercedes in the reliability category.

The R8 gets all the usual safety features including a full complement of airbags, traction control and stability control, but it has never been crash tested by Euro NCAP. However, the car’s strong hi-tech construction means it should be solid in an accident, while the car’s four-wheel drive, excellent handling and powerful brakes mean that it’s equipped to avoid accidents despite the power of the engines.

More expensive than the Coupé, but better value for money

The R8 Spyder costs just under £9,000 more than a similarly specced R8 coupe. Compared to exotic rivals such as the Ferrari 458 and the McLaren 12C, it is tens of thousands of pounds cheaper and loses little in the way of performance.

All models gets LED headlights, a leather interior, and sat-nav. Spec your R8 wisely – with options such as the adaptive dampers, an automatic gearbox, and a premium stereo – and it will be a more attractive second-hand purchase come resale time. A new Audi R8 is set to be revealed later this year, which could harm resale values of the current model.