BMW has an excellent reputation for reliability, so the BMW X1's 100th-place finish in our Driver Power 2014 survey won’t make easy reading for company bosses. Our survey evaluated the pre-facelift model, so we’ll be looking for a decent improvement in 2015. The car’s safety isn’t in doubt, though, as it achieved five stars when it was crash-tested by Euro NCAP.

In our Driver Power 2014 owner satisfaction survey, the BMW X1 tumbled 42 places from 2013 to finish 100th out of 150 cars. The car’s heavy steering no doubt contributed to a poor score for ease of driving (147th), but its ride (129th) and build quality (118th) also came in for major criticism. A 47th-place finish for running costs doesn’t sound hugely impressive, but it means the car was the best-performing compact SUV in this category. The Audi Q3 provides a stark contrast to the BMW’s performance. It finished in 17th place overall, coming fifth for reliability, 14th for ride quality and 18th for build quality. 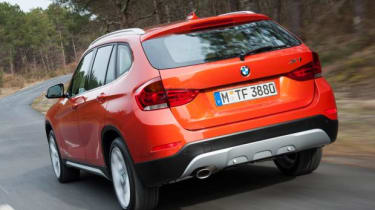 Euro NCAP gave the BMW X1 five stars when it was crash-tested in 2012. A passenger cell that remained stable, plus good protection for the front passengers’ legs helped the BMW to score of 86% for adult occupant protection. The car was awarded maximum points for infant protection, too. The front passenger airbag can be switched off and the dangers of using a rear-facing child seat with it switched on are clearly labelled.

To make the X1 even safer, buyers can specify items such as run-flat tyres that can be used even with a puncture (£185), adaptive headlights that follow the direction of the steering wheel (£290) and high-beam assist (£150), which automatically dips the main-beam headlights when it detects another car on the road.