The BMW X1's upright body means it can offer more interior space than the BMW 1 Series hatchback and rear-seat space should also be adequate for most adults. The X1’s boot is 60 litres bigger than the 1 Series’ and all models come with 40:20:40 split-folding rear seats.

The tall body of the BMW X1 means that headroom is generous in the front and back, but the car’s short length means that rear legroom is less impressive – adults under six feet tall should be able to fit in without too much bother, though. 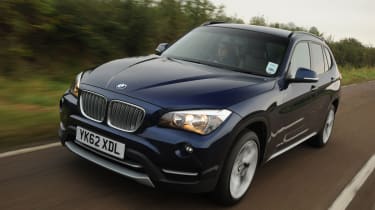 The rear seat is flat, so there’s room for a third passenger, but the downside is the car’s transmission tunnel, which eats up the space where the middle passenger would put their feet. Small rear doors mean access to the back seat is tighter than it is in larger models, such as the BMW 3 Series.

Look around the cabin and you’ll find there’s no shortage of cubbyholes, while the X1’s door pockets will (with a bit of persuasion) hold a large bottle of water.

While the BMW X1 offers much more boot space than the 360 litres you get in the BMW 1 Series, its 420-litre capacity is 40 litres smaller than the Audi Q3’s and a significant 155 litres short of what the five-door Range Rover Evoque can hold.

Just like its rivals, the BMW’s large boot opening gives excellent access and there’s only a small lip to lift heavy items over. The back seats drop down flat to reveal a total luggage capacity of 1,350 litres and there’s also a useful storage area under the boot floor. The £215 Extended Storage Pack adds a storage net, retaining straps on the boot floor, and an underfloor tray with dividers. The pack also includes additional power sockets: one in the rear centre console and one in the luggage compartment.