The BMW X1 looks like an estate car on stilts and that’s how it feels to drive. There’s more body lean in corners than in a BMW 1 Series, but it’s well controlled and doesn’t put you off pressing on if you need to. That lean is even easier to accept when you factor in the car’s comfortable suspension setup. M Sport models have larger alloy wheels and stiffer suspension that makes them less comfortable, but they feel more taut in corners. The steering is also direct, but it’s surprisingly heavy, particularly in town where light steering makes for easier manoeuvring.

Push firmly on the accelerator pedal and you won’t be disappointed by the 20d’s poke. It can get from 0-62mph in just 7.8 seconds and will be spritely enough for most people. The eight-speed automatic gearbox is a £1,500 option, but it’s worth going for. Its smooth shifts suit the comfortable X1, plus it boosts fuel economy and will make the car a more attractive second-hand purchase when you sell it on. 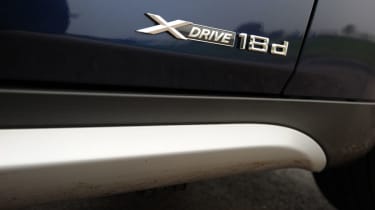 The slowest model is the 16d, which gets from 0-62mph in a fairly dreary 11.5 seconds, while the 18d does the same in 9.9 seconds. With 215bhp, the 25d is the fastest model in the range – it gets from 0-62mph in 6.8 seconds and can exceed 140mph flat out. It’s the only model in the range to come with four-wheel drive as standard and the engine’s power is delivered to the road without fuss as a result.

The only petrol-powered model is the X1 20i and its 2.0-litre engine gives the BMW a decent turn of speed – 0-62mph takes just 7.8 seconds. Its price and running costs mean that it’s unlikely to be a popular choice on the UK market, though.

With a ride height only slightly higher than a normal car’s (and suspension that hasn’t been designed with mud-plugging in mind) the X1 is of limited use off-road. The rear-wheel-drive setup of sDrive models means even a front-wheel-drive hatchback (such as the Ford Fiesta) will be more capable on snowy roads.