The Ford Kuga is a very safe car, although reliability is more of a concern

The Ford Kuga came 34th out of the 100 cars rated by owners in our 2019 Driver Power satisfaction survey. In previous years it’s performed a little better, probably because it was newer, but this is still impressive and it happens to be the highest ranking Ford in the survey.

The Kuga also has seriously impressive safety credentials: not only did it gain the full five stars in its Euro NCAP safety assessments, but it’s one of a small (but growing) number of cars to have scored 100% for its safety assistance technology.

Ford as a brand didn’t fare so well, coming 23rd out 30 manufacturers. Owners biggest complaints were the exterior styling of their Fords, build quality, practicality and space and interior and comfort. These scores are quite lacklustre across a number of areas but it does seem Ford have got it right with the Kuga.

When it came to reliability, just 13.1% of Ford owners reported faults in the first year of ownership. These are remarkable statistics when you consider Ford's lacklustre overall performance in the survey. 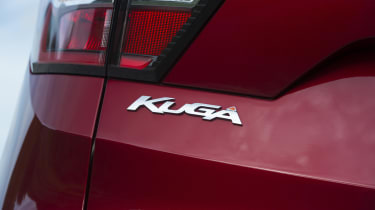 The Ford Kuga offers excellent crash protection and it received the maximum five-star rating when it was crash-tested by Euro NCAP. All Kugas come with skid-preventing electronic stability control, numerous airbags, a seatbelt warning buzzer for every seat and cruise control with a speed limiter.

Ford's well priced options list comes up trumps for safety by offering a Driver Assistance Pack for around £1,100. That includes autonomous braking, lane-keeping assistance, traffic-sign recognition (which displays roadside information on the dashboard), blind-spot warning system, auto-dipping headlights and a driver-alert system that can detect if you're nodding off and suggest you take a break.