The latest Ford Kuga petrol engine is even more efficient than the old one, but the diesels are still our pick

The Ford Kuga uses a range of proven engines and the diesels offer the lowest running costs. They also feel better suited to hauling this heavy car along than the petrol alternatives. Those who need four-wheel drive or an automatic gearbox will find running costs increased compared to the two-wheel-drive versions.

The Kuga works best when fitted with one of the three diesel engines on offer. The 2.0-litre 148bhp engine is our favourite; this can return up to 43.5mpg, while CO2 emissions of 144-164g/km (depending on wheels and gearbox) put it in medium Benefit-in-Kind (BiK) brackets for company car drivers. All Kugas will cost £145 a year to tax, although if you manage to push the range-topping Vignale version past the £40,000 mark with optional extras, an additional £320 road tax supplement will apply for the first five years of ownership.

The 2.0-litre 178bhp diesel, which has four-wheel drive as standard, can manage up to 43.5mpg but for some models this can drop as low as 39.8mpg. Ford has discontinued the 118bhp 1.5-litre diesel version of the Kuga. It had an NEDC fuel economy figure of 54.3mpg but drivers will be unlikely to achieve this in the real world. The current engines offered have been revised with the latest WLTP fuel figures.

The 1.5-litre petrol cars come with either 118 or 148bhp. Ford also discontinued a 174bhp version of this engine which came with four-wheel drive. However, fitting winter tyres on the two-wheel-drive models in the colder months will boost their grip levels substantially. The fuel savings and performance gains associated with two-wheel drive will be more relevant to most owners.

Both the 118bhp and 148bhp models can return claimed fuel economy of around 35mpg, a pretty decent figure for a bulky petrol-powered SUV. However, the higher powered version with an automatic gearbox sees fuel economy drop to around 31mpg. 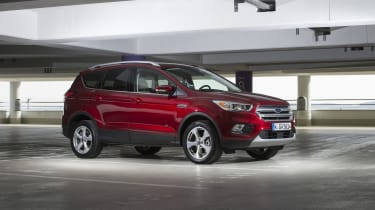 Fords are known for their low maintenance costs and the company has one of the biggest dealer networks in the UK. The brand also offers a Protect Premium plan that allows you to pay for your car's servicing with a lump sum. Prices start from £380 for two services or £520 for three, which includes a more comprehensive major service.

The Ford Kuga, like all new Fords, comes with a three-year warranty. There's no mileage limit during the first year, but years two and three are only covered as long as you haven't exceeded 60,000 miles in total.

Exactly which model of Kuga you choose can have an impact on insurance costs – the entry-level petrol model sits in group 14, while the top-of-the-range diesel Vignale occupies group 26.