The Ford Kuga feels more grown-up than most of its rivals. Although the Kuga's suspension has been tweaked for comfort rather than outright agility, and its electric power steering is a little lacking in feedback, it's still one of the better cars to drive in its class, resisting lean in corners more than some conventional hatchbacks.

The Mazda CX-5's better feel through the steering wheel feel makes it an easier car to drive quickly on twisty country roads, although this is largely redressed in the Kuga ST-Line thanks to sports suspension and steering that’s recalibrated for greater feel. 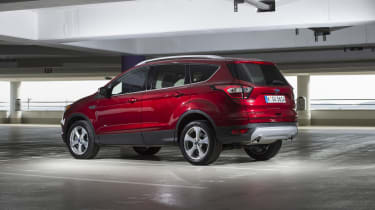 The entry-level 118bhp two-wheel-drive 1.5-litre EcoBoost petrol engine offers a 0-62mph time of 12.6 seconds, which is fine around town but may be a little sluggish for those who spend a lot of time on the motorway. The 148bhp version is much better, getting the car from 0-62mph in 9.7 seconds when fitted with a manual gearbox, while not affecting quoted economy figures.

The more powerful four-wheel-drive-only 178bhp petrol, which has been discontinued, came with an automatic gearbox that increased running costs and blunted performance compared to the manual. The automatic gearbox is also underwhelming, choosing the wrong gear at inopportune moments. The added grip of the four-wheel-drive system doesn't help performance either, with 0-62mph taking 11.4 seconds, the top-of-the-range 4WD petrol is actually slower than the less powerful 2WD model.

The 148bhp 2.0-litre diesel model is available with two-wheel drive in Titanium models and above, with Zetec customers able to choose a 4x4 version, should they wish. It’s a quiet cruiser at the legal limit and can manage a 0-62mph of 10.1 seconds. This engine feels well capable of propelling a car as bulky as the Kuga, with plenty of power of easy overtaking and confident towing. Zetec spec can be chosen with this engine and four-wheel drive which actually reduces the 0-62mph time, but only by a virtually unnoticeable two tenths of a second.

We haven’t tested the 1.5-litre 118bhp diesel yet, but with its sluggish quoted 0-62mph time of 12.7 seconds, we wouldn’t recommend going for a model with less than 148bhp.

Like the petrol engines, the top-of-the-range diesel comes with four-wheel drive only, but gets from 0-62mph in 9.2 seconds in manual form. Both diesels can be specified with Ford's Powershift dual-clutch automatic gearbox, but it's too hesitant when shifting manually and slightly slower with a 0-62mph time of 10.0 seconds.