There’s plenty of space inside the Ford Kuga for five occupants and their luggage, but there's no seven-seat option to compete with the Nissan X-Trail.

Although the Kuga only has five seats, there's plenty of room front and rear, especially in the back where there's lots of legroom and space for three adults to fit comfortably. It's not the most spacious car in the class – both the Honda CR-V and Kia Sorento offer more rear legroom, but the CR-V can't match the Ford's rear headroom.

The Kuga has plenty of storage space around the interior, including a big centre cubby, large door bins and a vast glovebox. There are also two drinks holders between the two front seats. 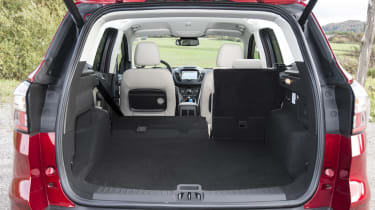 The Ford Kuga boasts a 456-litre boot, which grows to 1,653 litres if you fold the rear seats. Those seats fold flat, too, making loading large items very straightforward indeed. The boot has a wide opening, there's no lip to lift luggage over and there's minimal intrusion from the wheelarches. The floor is low, too, which makes things even easier. The boot space easily matches that of its rivals – while that of the Renault Kadjar is very slightly bigger with its rear seats in use, its total volume is slightly lower with them folded down.

If your chosen trim doesn't include it, you can specify an optional hands-free powered bootlid. This opens at the touch of a key-mounted button or, for added convenience (or simple car park one-upmanship) when you wave your foot under the rear bumper. This is helpful if you've got armfuls of shopping and can't reach your keys.

Even if you go for one of the more basic models, the Ford Kuga is a strong tow car: the entry-level petrol model can pull 1,500kg. The top-of-the-range diesels can pull up to 2,100kg, but the 1.5-litre diesel is rated at just 1,200kg. A Ford-approved retractable tow bar is a £937 option.