Plenty of space, but higher-spec Mitsubishi L200 models will prove easier to live with

The Mitsubishi L200 has the longest interior of any pickup on sale, meaning there’s a decent amount of space on offer.

The driver’s seat is mounted quite low to the floor, so the driving position is almost like a sports car’s. The steering wheel adjusts up and down as well as in and out, so getting comfortable is easy.

The front seats are excellent, with thicker side bolsters and more thigh support than before. Plus, Mitsubishi says it has improved a number of parts in the chassis to better isolate occupants from bumps and road noise.

The four-door-only L200 Double Cab offers perfectly adequate head and legroom up front. But while three adults can squeeze in the back seats, taller passengers may have to tuck their knees up to fit in. At least two ISOFIX child-seat mounts are fitted as standard. 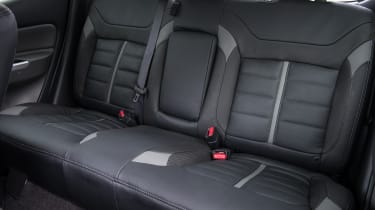 Surprisingly for a commercial vehicle, there isn’t a huge amount of in-car storage. The door pockets are quite narrow, although just wide enough for a small bottle of water, while the handbook takes up a significant amount of the glovebox. Although you can remove it, of course…

Okay, so it’s not a boot as such, but a pickup’s load bed is where you’ll put most of your cargo. As with other pickups, there’s a bit of a security risk if you don’t choose one of the optional cargo covers or hardtops. They’re quite expensive, but we’d strongly recommend you buy one.

The load bay measures 1,470mm square and is 475mm deep – a little deeper than the old car’s. You gain access by opening the bottom-hinged tailgate, which is quite heavy and features a mechanism to prevent it opening on the move – a problem common on some other pickups.

But unless you choose the Barbarian model (which has a soft-opening tailgate), you get one that clangs open.

There are six load-lashing points and grooves in the load bed allow it to be divided up to separate cargo. There’s also a step cut into the rear bumper on higher-spec models, allowing easier access to the load bed.