On sale for more than 30 years, the Mitsubishi L200 is a top-selling pickup truck with a reputation for toughness and reliability. Over the years the L200 has also been fitted with many luxuries you’d normally associate with cars and SUVs.

Pickups aren’t quite as cheap to tax as previously, but lower running costs help offset this and the L200 is still a good choice if you need a utilitarian vehicle.

It’s a competitive arena, with rivals including the Nissan Navara, Toyota Hilux, Volkswagen Amarok and Mercedes X-Class, but the L200 has undeniable style. Its chrome trim might be a bit brash for some tastes, but the L200 isn’t expensive, coming in at under £20,000. 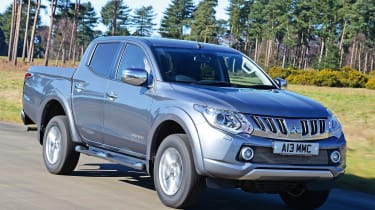 The entry-level 4Life models are the most workmanlike in the line-up, best suited for those who want great value and don’t see the L200 as a family car. In contrast, the Titan, Warrior and Barbarian trims have more equipment and feel more luxurious.

Every L200 gets air-conditioning but the Titan model looks more stylish thanks to alloy wheels and tinted windows, plus it has a DAB radio.

The L200 previously only came as a ‘double cab’, with enough space for adults both in the front and back seats and four doors for easy access. You can carry 1,050kg of weight in the load bed, which is 1,470mm in length and width, while from 2018, the L200 can tow a braked trailer weighing up to 3,500kg. Workhorse versions are also now available in single-cab and so-called 'Club Cab', which offers small rear seats for occasional use, with a half-sized rear door on each side.

There’s only one engine, a 2.4-litre diesel with 178bhp, which offers competitive, smooth performance, taking the L200 from 0-62mph in just 10.4 seconds – quite quick for a pickup, and more so than some more powerful rivals thanks to its relatively light weight. With a claimed fuel economy of 40.9mpg and CO2 emissions of 180g/km, the L200 doesn’t sacrifice economy either, placing near the top of the pack for running costs. You’ll need to find £1,400 for the automatic gearbox, but we think it suits the L200, so it’s worth it if you can afford it. 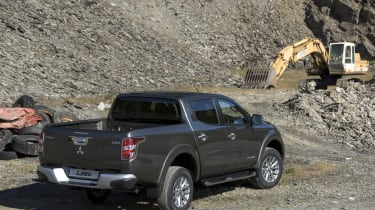 The main negative is refinement. The L200 is loud under acceleration and can feel bouncy over bumps. It doesn’t compare too badly with other pickups, but those who think the L200 is a direct equivalent to an SUV are likely to be disappointed.

However, most pickup buyers expect some compromises and the Mitsubishi L200 has impressively few, making it one of the best models in its class.