Class-leading safety credentials, while the Mitsubishi L200 should continue its reputation for reliability

For a commercial vehicle such as the Mitsubishi L200, reliability is paramount. If a vehicle is off the road, then it’s not earning its keep. It’s no surprise that the L200 enjoys a hard-won reputation for reliability.

Its safety credentials are on an even more solid footing, with more safety kit than you’d find in a Toyota Hilux, Ford Ranger, Nissan Navara or Volkswagen Amarok.

In our 2015 Driver Power customer satisfaction survey, Mitsubishi was ranked 11th out of 32 manufacturers for reliability, although it languished in 18th place for build quality. That was reflected by our time with the L200. The interior seemed robust, but the materials lacked the reassuringly tactility you get in similarly priced SUVs. 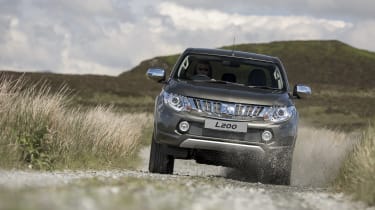 It’s important to note the Driver Power survey only covers cars, rather than commercial vehicles. But even so, we’d expect plenty of that robust DNA to seep into Mitsubishi’s pickup.

The L200 comes with many safety features that you’d expect to find in an SUV, but aren’t necessarily a given in a pickup. Occupants are protected by seven airbags and stability and traction control systems that can direct power to the wheels with the most grip. Euro NCAP awarded the car four out of five stars in its 2015 round of crash tests, giving adult and child occupant scores of 81 and 84% respectively.

An adjustable speed limiter along with Trailer Stability Assist that works with the stability control system to avoid towing mishaps is fitted as standard. L200 buyers also benefit from hill-start assistance and brake lights that flash if the anti-lock brakes are activated. It’s a shame that a lane-departure warning system is only available on more expensive models.