The Mitsubishi L200 is substantially cheaper to run than its rivals

The new Mitsubishi L200 is the first of a fresh crop of pickups coming from a number of manufacturers, so it’s hardly surprising it’s the most fuel-efficient vehicle of this type available right now.

Just one engine is available in the Mitsubishi L200 – a 2.4-litre turbodiesel – although the entry-level L200 4Life has less power than the rest of the range. And with all models featuring a four-wheel-drive system that engages only when you need it, the L200 is surprisingly light on fuel and usefully cheap to run.

Mitsubishi claims that with a manual gearbox, the L200 will return 40.9mpg on average. That’s better than the 36mpg of the Toyota Hilux and Ford Ranger as well as the 35mpg Volkswagen Amarok, but falls just short of the 44mpg Nissan Navara. 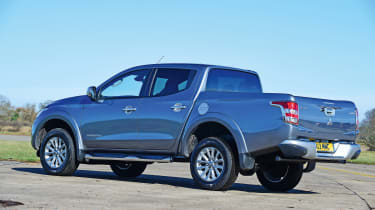 The entry-level 4Life is a little more economical, while L200s with automatic gearboxes are slightly less efficient – but not by enough to make a huge difference to your fuel bills.

Although commercial vehicles are currently taxed at a flat rate, rather than one based on their CO2 emissions like passenger cars, the L200 has solid eco-friendly credentials. It emits just 180g/km of CO2, which is particularly impressive compared to many of its four closest rivals, which emit between 203 and 256g/km.

All models in the L200 range come with a five-year warranty. In addition, all vehicles are supplied with a 12-year anti-corrosion and perforation warranty and three years of Europe-wide breakdown cover.

The Mitsubishi L200 requires servicing every 12,500 miles or 12 months, whichever comes first. Despite Mitsubishi using a timing chain that doesn’t need replacement and coolant that needs changing less frequently, the L200 still needs to be serviced more frequently than the 18,000-mile/12-month interval of the Navara and Ranger and the Amarok’s impressive 24,800-mile/24-month interval. A 'reasonably priced' Mitsubishi Service Plan, which will cover the first three services, will be offered.