One of the best things about electric cars like the Nissan Leaf is that its electric drivetrain has very few moving parts. In a petrol or diesel-powered car, there are hundreds. That should make conventional problems few and far between.

The Nissan Leaf was rated above average for reliability in our 2017 Driver Power owner satisfaction survey of cars currently on sale in the UK. Of the owners who responded, 17.5% reported experiencing a problem with their car at least once.

The Leaf is still a comparatively uncommon sight on the road, so it’s hard to plot common problems for the time being. However, electric cars in general are still a little bit of an unknown quantity and there are niggling questions about battery life and degradation over time. Because of this, Nissan now gives buyers the option of leasing the car’s battery – with a promise to replace it when it reaches the end of its usable life. The battery pack is also covered by a warranty for between five and eight years. 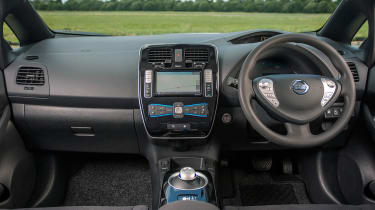 The Nissan Leaf scored the full five-star rating in the Euro NCAP crash-test programme back in 2012. It managed an impressive 89% for adult occupant protection, 83% for child occupant protection and 65% for the way it protects pedestrians. It also achieved 84% in the safety assist category for its safety systems.

All models have the same standard safety features, which include six airbags, two rear ISOFIX child-seat mounts, tyre-pressure monitoring and a sound synthesiser to warn pedestrians of your approach. The Leaf also features a wide range of electronic grip and stability controls plus an electronic speed limiter.