"The Nissan Leaf is quiet, comfortable, easy to drive and incredibly cheap to run. It marks a milestone in the development of electric cars"

It’s amazing to think the Nissan Leaf has been on sale for over half a decade, becoming the world’s best-selling electric car in that time. The Tesla Model S is much faster and the BMW i3 is more exotic, but the Leaf is more practical than the BMW and costs far less than the luxurious Tesla. The Renault ZOE is a more obvious competitor that can now go further in Z.E.40 trim, but it’s also only supermini-sized.

The first truly mass-produced electric vehicle (EV), the Nissan Leaf played a huge role in showing prospective buyers that an EV can be as easy to own as a petrol or diesel car. Hop in and it’s as simple as pressing the start button, selecting ‘D’ just like a conventional automatic and driving off, albeit in near-silence.

Of course, as well as being better for the environment, the Leaf’s main USP is its low running costs, with a single charge costing roughly £2 from your home electricity supply. Electric vehicles with zero emissions are also eligible for free road tax, along with London Congestion Charge exemption. Business drivers are drawn to the Leaf by its low 7% Benefit-in-Kind rate. 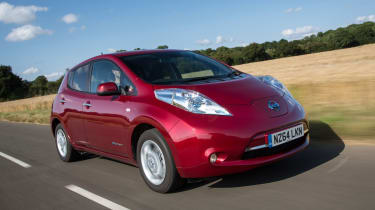 The Leaf isn't suitable for everyone, though, with a range of up to 124 miles in the 24kWh model and 155 miles with the 30kWh battery pack, which costs around £1,600 more. This should be plenty for anyone with a short to medium-length commute, or those who drive between locations with access to charging.

Like most official consumption figures, the laboratory range of EVs should also be taken with a pinch of salt, with real-world conditions, cold weather or using the air-conditioning seeing the range cut significantly.

Clearly no sports car, and never intended to be, the Leaf is extremely quiet at low speeds and comfortable, with soft suspension ironing out imperfections. This also means the Leaf will lean quite a bit in corners, but it’s at its best driven in a relaxed manner and most at home in built-up areas. Motorway cruising is no problem, either, but sustained high speeds will take their toll on your range. Producing around 108bhp, the Leaf takes 11.5 seconds to go from 0-62mph, matching economical diesel models. 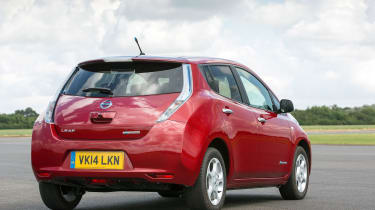 Charge the Leaf from a conventional plug socket and you’ll be in for a 12 to 15-hour wait, but this will probably be a last resort for most Leaf owners. A dedicated home ‘wall box’ reduces this to between 9.5 and four hours depending on which battery pack you have and if you choose Nissan’s optional on-board charger. At a public rapid-charging station, the Leaf can charge from zero to 80% in around 30 minutes.

Battery degradation shouldn’t be too much of a concern, with Nissan guaranteeing the 24kWh battery pack for five years and the larger pack for eight years, with assurances they’ll be repaired or replaced if performance drops below a certain level. Along with its extra range, this is another good reason to go for the 30kWh version, because replacing a battery pack out of warranty could cost around £5,000 (although Nissan will contribute £1,000). Leasing the battery pack is also worth looking into, costing from £70 a month. Saying that, it’s reported that older Nissan Leafs are still showing good battery performance.

Three trim levels are offered, with the entry-level Visia only coming with the 24kWh battery. It includes Bluetooth, air-conditioning and a fast charging port. The Acenta trim has 16-inch alloy wheels and is our choice thanks to its infotainment system, which adds a lot of functionality, including a smartphone app to monitor your Leaf’s charging and battery from afar – handy when you go for a coffee or shopping until it’s full.

The Nissan Leaf finished 33rd out of the 75 cars ranked in our 2017 Driver Power owner satisfaction survey of cars currently on sale in the UK. A five-star crash-test rating from Euro NCAP is encouraging, too.