The Nissan Leaf is relaxing but unexciting to drive

The Nissan Leaf is certainly no sports car, but it’s extremely quiet and really very comfortable on the move. There’s a low hum from the electric motor as the car moves along, which can make negotiating car parks full of surprised shoppers particularly frustrating. But once you’re on the open road, the absence of engine noise is blissful when you’re used to the rumble of a petrol or diesel in the background.

Soft suspension allows the Leaf to soak up lumps and bumps with ease, making for a relaxed ride. The trade-off is that this isn’t a car you’ll particularly want to drive at speed on a twisting road. That’s made worse by light steering that lacks the precision of a BMW i3’s. 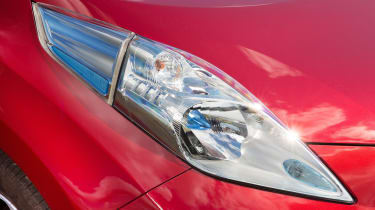 The Leaf works best around town, where these shortcomings are less apparent. And a relatively low top speed is a moot point for a car that’ll likely spend most of its days within 30mph speed-limit zones.

The Leaf is incredibly easy to drive – in fact, it drives just like a conventional car. You push the start button, select the ‘D’ option with the gear selector and then pull away silently. The electric motor generates the equivalent of 108bhp and because all of its power is available immediately, it's very quick off the line.

That makes the Leaf ideal for congested city streets where the traffic frequently stops and starts and quick getaways out of junctions are often required. The 30kWh battery provides the same performance, but gives you greater range. Top speed is only 89mph, but the Leaf goes from 0-62mph in 11.5 seconds, making it perfect for stop-start urban driving.

It’s eerily quiet at times, which takes some getting used to, and you’ll hear all manner of bumps and thumps that are usually masked by the drone of a car’s engine.