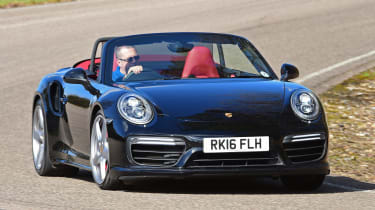 The Porsche 911 Cabriolet is a motoring institution. The rear-engined 911 has been on our roads for over 50 years now, while the Cabriolet version first appeared in 1982. Since then, the roofless 911 has established itself as something of a style icon.

Previous generations of the 911 Cabriolet have been criticised for their compromised handling – a result of structural changes caused by removing the roof – but this latest version is the stiffest yet, providing wind-in-the-hair thrills together with a virtually peerless driving experience. The Porsche 911 Cabriolet isn’t cheap by any means – it can easily cost more than £100,000 – but for many, no other car will do, such is the prestige attached to the 911 name.

The 911 Cabriolet competes with other roofless luxury cars such as the Jaguar F-Type convertible and Mercedes SL, which, with its folding hard top, offers a less sporty and more relaxing driving experience. The new Audi R8 Spyder is due to arrive in 2016 and is likely to provide a convincing alternative for those lucky enough to be considering 911 Cabriolet ownership.

The 911 Cabriolet is available with either two or four-wheel drive, together with a choice of manual or dual-clutch automatic gearboxes and a selection of engines. In 2015, Porsche updated the 911 line-up, with new turbocharged 3.0-litre engines fitted to the most popular models.

Even the entry-level Porsche 911 Carrera Cabriolet is a very fast car: its 3.0-litre six-cylinder engine is turbocharged to produce 365bhp, allowing it to reach 62mph from rest in 4.6 seconds while returning 33.2mpg – impressive fuel economy for a sports car with this much performance. For drivers after even more speed, the 911 Cabriolet Turbo has a revised 3.8-litre twin-turbocharged six-cylinder engine which now produces 532bhp, enough to get it from 0-62mph in just 3.1 seconds on the way to a top speed of 198mph. The 911 Cabriolet Turbo is one of the most exhilarating convertibles ever.

The 911’s cult following is such that Porsche’s decision to decrease the size of the car’s engines and fit turbochargers was a controversial one. This has, however, made the 911 Cabriolet an impressively efficient car – at least in terms of fuel consumption.

The least powerful 911 Carrera Cabriolet produces 365bhp, yet returns an official economy figure of 33.2mpg – a number that would have been unheard of a few years ago. True, the 195g/km of CO2 emitted by this car means you’ll face annual road tax of £265, but that’s unlikely to worry buyers at this end of the market.

The further you go up the 911 Cabriolet range, the more expensive and less economical the cars become. The Carrera S Cabriolet, for example, returns 32.1mpg and costs £290 a year in road tax. If you want the added grip offered by the four-wheel-drive 911 Carrera 4 Cabriolet, fuel economy drops a little more, to 31.7mpg, while CO2 emissions rise to 206g/km for a £290 road tax bill.

Note that all these figures are for the 911 Cabriolet fitted with the standard seven-speed manual gearbox. If you order the optional dual-clutch automatic (which Porsche calls PDK) then performance and economy figures improve slightly.

At the extreme end of the Porsche 911 Cabriolet line-up is the Turbo model. Its extreme performance comes at a price; it costs over £135,000 and economy stands at 30.4mpg and 216g/km CO2. These numbers seem almost reasonable in light of the performance on offer but do bear in mind that you’ll have to drive your 911 Cabriolet with a great deal of discipline to achieve these economy figures – exploit the car’s performance and they’ll drop significantly.

Running costs will be high for all 911s – expect servicing that sets you back around £1,000 at a time and expensive group 50 insurance premiums.

Few cars can match the sheer driving pleasure of the 911

One thing that 911 drivers have always liked is the distinctive noise of Porsche’s special six-cylinder engines, which can be heard even clearer in a 911 Cabriolet with the roof down. While the introduction of turbochargers has changed the nature of the sound, it’s still a special experience.

Drop the roof – which takes just 13 seconds and can be done at speeds up to 35mph – and you’re treated to the 911 Cabriolet’s engine in full voice, with a lovely exhaust note supplanted by whooshing turbos. We like the noise, but it may take a little getting used to if you’re more familiar with Porsches of old. Ironically the Cabriolet Turbo doesn’t sound quite as special, as every aspect of the engine setup is totally devoted to performance so you get an assortment of whistles, chirps and whooshes that drown out much of that that six-cylinder bark.

In terms of handling, the 911 Cabriolet has always played second fiddle to the standard 911 Coupe, but the latest Cabriolet is still the sharpest yet. There’s plenty of grip on offer, particularly if you go for one of the four-wheel-drive ‘4’ versions, and the steering – always a 911 highlight – is sharp and accurate, with plenty of feel transmitted through the wheel.

When the roof is up, you’d be hard-pressed to tell you were in a convertible, such is the refinement. While conversations on the motorway can be difficult with the roof down, and there’s obviously some wind noise, this is part and parcel of the drop-top driving experience and the sound of the engine behind your head adds to the thrills.

You’re unlikely to want for power or speed, whichever 911 you choose. The standard 911 Carrera Cabriolet has 365bhp and reaches 62mph from rest in just 4.6 seconds, while the 414bhp Carrera S Cabriolet does the same in 4.1 seconds – although it costs about £10,000 more than the standard car.

Although the £135,000 Porsche 911 Turbo Cabriolet is difficult to beat for outright performance, with its 533bhp 3.8-litre engine and 3.1 second 0-62mph time, It’s actually harder to have fun in the Turbo than in lesser models; the speed required to bring the car close its limit is likely to see most drivers run out of ability before the car does. In this respect, ‘lesser’ versions of the 911 offer a more accessible driving experience.

Refinement is excellent for such a performance-orientated car. It’s possible to drive the 911 Cabriolet every day without being intimidated or feeling the need to use all its performance.

The standard electronic wind deflector keeps buffeting to a minimum when the roof is down and the excellent quality of the 911’s cabin materials make it an enjoyable place in which to spend time.

The Porsche 911 Cabriolet’s rear seats are small but useful

The 911 is unique in this class of car in offering rear seats, but they’re best thought of as an extra luggage compartment or an emergency transport option – even small children will find them a squeeze.

Because the 911 is rear-engined, its boot is at the front. At 145 litres – and this drops a further 20 litres if you order a 911 Cabriolet with four-wheel drive – it’s not big, but it is a deep, useable space that can easily swallow shopping or squashy bags for a weekend away. A drawback of it being at the front of the car is that the boot lid gets dirty very quickly.

The 911’s relatively compact dimensions mean manoeuvring around town is easy and it fits into most parking spaces comfortably, aided by the standard parking sensors. While nobody buys a 911 Cabriolet with trips to the tip in mind, it’s by no means entirely impractical.

The Porsche 911 Cabriolet feels like a quality product, inside and out

The Porsche 911 Cabriolet is every inch a luxurious, high-quality car. The cabin is beautifully made and all the controls operate in a reassuringly solid manner. This craftsmanship isn’t backed up with perfect reliability, though: the previous-generation 911 fared relatively poorly in our 2015 Driver Power customer satisfaction survey, coming 109th out of 200 cars.

Porsche as a brand did significantly better, ranking sixth out of 32 manufacturers for owner satisfaction, and we’d hope this latest 911 signals an improvement in terms of reliability.

While the 911 doesn’t sell in large enough numbers to warrant Euro NCAP safety testing, Porsche fits a wide range of safety equipment to all 911s. Porsche Active Suspension Management (PASM) helps ensure the car stays planted on the road, while big, powerful brakes, traction control and a host of airbags together ensure the 911 is a very safe car. The 911 Cabriolet also has rollover protection, with spring-loaded bars ready to deploy if the car senses an imminent crash.

The Porsche 911 Cabriolet has a decent amount of standard kit, but options are expensive

The Porsche 911 Cabriolet is an expensive and exclusive car, but it holds its value well on the secondhand market. You can be as indulgent as you wish with 911 options – Porsche’s ‘Exclusive’ personalisation programme means anything from the seat stitching to the colour of the brake callipers can be specified to your taste – but ticking too many boxes on the vast extras list means the 911 Cabriolet becomes eye-wateringly expensive.

Rivals like the Aston Martin V8 Vantage cabriolet and Jaguar F-Type convertible offer a more traditional front-engined sports-car experience, but there’s something special about the 911 Cabriolet that’s kept buyers coming back for over 30 years. One final point to consider: if the 911 Cabriolet is too expensive for your tastes and you still fancy an exclusive German convertible, a Porsche Boxster is around £40,000 cheaper. 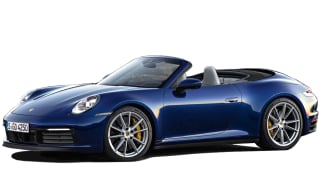