The Porsche 911 has been around for decades and in that time it’s been honed and improved to become one of the most respected performance cars in the world. On early models, the position of that heavy rear-mounted engine led to unpredictable handling characteristics, but the latest version is impeccably balanced – as well a being agile and very, very fast.

Of all the sports cars you can buy, the 911 range is undoubtedly the most complicated, with numerous engines and enough versions to boggle the mind. Many will feel little need to bother with the upper models, though – even the entry-level Carrera can dispatch 0-62mph in just 4.6 seconds thanks to a 365bhp, twin-turbocharged, flat-six engine.

The Carrera T and Carrera S are next up, the former using the same 365bhp engine but promising sharper reflexes thanks to a recalibrated gearbox and weight reductions from thinner window glass and deletion of the rear seat (which you can reinstate optionally). With the standard seven-speed gearbox, it shaves only a tenth of a second from the Carrera's 0-62mph time, but the seven-speed PDK automatic version takes just 4.2 seconds.

The Carrera S ups engine power to 414bhp, taking the automatic version's 0-62mph time below the four-second mark, without employing the weight-reduction measures of the Carrera T – although these are optional. The manual version can reach 62mph in 4.3 seconds and is available with a limited-slip differential that can't be chosen with the PDK automatic gearbox.

You might be torn between the S and T – only £3,000 separates them. However, although it has less power, the T features many items that are only available optionally on the S, including that limited-slip differential, while active rear-wheel steering is optional. The T is aimed squarely at driving purists, with extra agility thanks to its performance hardware and astonishing grip levels on dry roads. Its steering offers impressive amounts of feel and its sports exhaust emits an evocative growl, but bear in mind that the T is harder to live with everyday.

Next comes the Carrera GTS with a 444bhp version of the same engine, which allows it to get from 0-62mph in 3.7 seconds when equipped with the seven-speed PDK twin-clutch automatic gearbox. Its top speed is 193mph. Going for the four-wheel drive model shaves another tenth of second off the 0-62mph time, bringing it down to 3.6 seconds.

The car rides 20mm lower than the standard 911 for enhanced handling and it helps give the GTS beautiful balance as well as its extra speed. The GTS represents a brilliant halfway house between the usability of the standard 911 and the pure driver focus of the GT3 version. 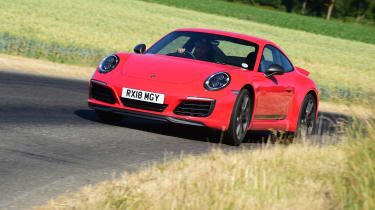 Given the choice we’d go for the fast and precise PDK automatic, as it’s quicker than the manual and more relaxing. However, if you must have a manual gearbox, it's excellent and you can use the money you save over the PDK by adding the sports exhaust system - it sounds fantastic.

Porsche Stability Management (PSM) is fitted as standard to all 911 models and monitors the car so that the system can brake individual wheels strategically to keep the car on its intended line.

All 911s now also get Porsche Active Suspension Management (PASM) as standard, which continuously alters the firmness of the ride depending on the road surface and your driving style. The system has two modes called Normal and Sport, which allow you to switch between suspension settings that are more comfortable and firmer respectively.

While every 911 is a rewarding car to drive, the GT3 takes the Carrera’s capabilities and polishes them to a fine sheen. Even looking at the car, it’s immediately obvious that this is no ‘ordinary’ 911 – there’s a beautifully sculpted aerodynamic bodykit that produces positive downforce to keep the GT3 firmly glued to the road at high speed. This, allied to precise tweaks to the steering and suspension, make it among the most exciting 911s ever.

Responses are immediate and you can really feel the road through the steering wheel. This gives you a great sense of confidence, which is enriched further by the sheer grip its fat tyres provide. What’s more, the shift from turbocharging to normal aspiration means the engine delivers its 493bhp with no hesitation whatsoever. Although the GT3 was initially offered with the excellent PDK gearbox, a six-speed manual has been added for even more involvement.

Despite its astonishing power when your foot is fully down, the GT3 is still remarkably civilised at low speeds and is happy to trickle along in slow traffic. When the opportunity arises, though, power builds up steadily until you reach a ballistic 9,000rpm red line, at which point the exhausts emit a raw, visceral and addictive scream.

If you need even more power, the 572bhp 911 Turbo S model is the quickest in the range, getting to 0-62mph in 2.9 seconds and accelerating just as vividly in any gear at any time. Like the GT3, it offers an exceptional amount of grip and is up there with the quickest road cars in the world from A to B. Despite that, it doesn’t feel intimidating at all – in fact, it encourages you to drive quickly with fast and communicative steering and a glorious soundtrack. 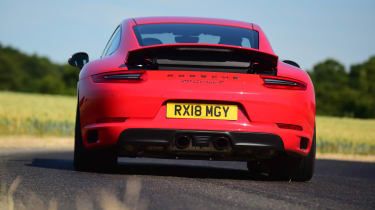 In addition to more power, the Turbo S comes with ceramic brakes, Porsche Dynamic Chassis Control (PDCC), active roll bars and the Sport Chrono Pack Plus. Like the standard Turbo, it has active rear steering, adaptive dampers and active aerodynamics that practically glue it to the road.For all its incredible performance, the Turbo S is just as impressive for the fact that it’s as easy to live with as any other 911. However, its price puts it in contention with bona-fide supercars such as the Lamborghini Huracan.

The GT2 RS only weighs 1,470kg, thanks to elements such as magnesium wheels, a lighter titanium roll cage and a carbon-fibre roof panel and bonnet. Combined with an exquisitely tuned suspension setup, which endows the car with incredible control without sacrificing ride comfort, beautifully judged steering and tons of traction, the low weight makes the GT2 RS one of the most thrilling and engaging cars to drive in the world. The only real drawback is that there is nowhere to fully exploit the car’s performance.