The Renault Captur isn’t the most fun car to drive in its class, but it’s accomplished around town and on long drives

The Renault Captur feels very much like the smaller Renault Clio to drive. Its light steering is great in town and makes it easy to manoeuvre. Out on country roads, the steering lacks enough feel to give you confidence for quick cornering, while significant body lean will also put you off driving too fast.

While the Captur makes for relaxing long drives, the Nissan Juke edges it for fun. The Captur is generally very comfortable, with supple suspension, but some potholes send a bigger impact through the interior than you’d notice in a Peugeot 2008.

The 1.3-litre TCe petrol engine is quickest, with 0-62mph taking 9.5 or 10.2 seconds, depending on whether you choose the 128bhp or 148bhp version. We prefer the manual, as the automatic is slow to respond, whether you use the steering-wheel-mounted paddles or not. It's a shame, then, that the 148bhp engine is only available with an automatic. 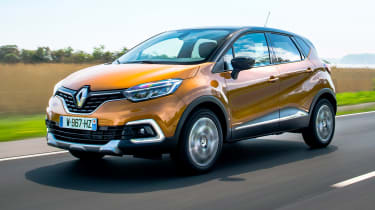 At the entry point into the range is a 0.9-litre TCe. That sounds like a very small engine, and it is, but because it’s turbocharged it actually feels punchy enough. Officially, it’ll get the car from 0-62mph in 13.1 seconds, although it feels faster than this time suggests. It’s a good fit for the Captur’s nature, which doesn’t really suit a big, powerful engine. While it is very quiet at moderate speeds, the lack of a sixth gear means it's a little loud on a motorway run. 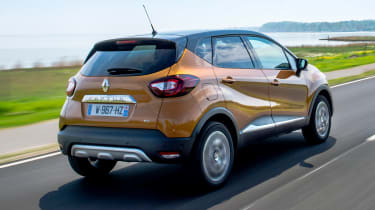 The 89bhp 1.5-litre dCi diesel is a reasonable performer that makes more sense if you often head onto the motorway on longer trips.

Be prepared to sacrifice a little bit of comfort with the diesel, though. It’s a little rattly and tends to vibrate through the pedals and the steering wheel more than the petrol. Still, if you cover more than 15,000 miles a year, we’d say going for a diesel is worth considering.