The Renault Clio has a good range of engines with decent performance, but the supermini’s handling isn’t quite up to scratch

Renault is famous for building sporty hatchbacks that are brilliant fun to drive, but the standard Renault Clio offers a more grown-up driving experience, focused on comfort and refinement.

Both engines in the Clio range are hushed and smooth around town, but neither offers anything more than brisk performance. 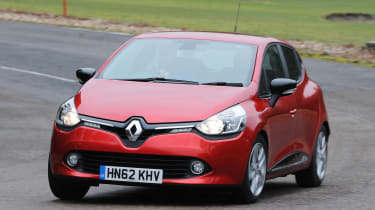 The tiny 0.9-litre three-cylinder TCe 90 is generally a strong performer. In congested city driving it’s responsive enough to nip in and out of gaps in traffic, and if you plan to spend most of your time taking the Clio on short journeys, the TCe is perfect. However, on the motorway and at higher speed, you can definitely hear a thrum from this engine, and trying to tackle steep hills exposes its relative lack of grunt. This is only exacerbated if you choose the less powerful TCe 75 model.

The 1.5-litre diesel engine delivers its power in a different way; it’s more relaxing to drive when cruising. It also accelerates faster than any of the petrol versions through the gears, so you don’t need to change down as often to overtake.

The Clio's steering is light, so the car feels easy to drive, but its five-speed manual gearbox has a loose and notchy action that’s nowhere near as precise as what you get in the Ford Fiesta. The six-speed EDC automatic gearbox is smoother when left to its own devices, but if you try to use the manual shift paddles on the steering wheel, the gearchanges can be quite hesitant – it lags behind the VW Group’s seven-speed DSG automatic in this area.

The suspension has been tuned for comfort and the Clio does a fairly decent job of stopping bumps and potholes rattling up into the cabin. In normal driving, it’s safe and reassuring, with good grip in corners, but the soft springs mean the body leans a bit, so you never feel inclined to drive it very fast.

At just over four metres long, the Clio is bigger than most superminis and feels a bit wider than them when parking and driving in town as a result. Forward visibility is a real strong point, but thick window pillars make reversing into a narrow parking space harder than it needs to be.