“In what is a very competitive class, the Renault Megane offers something slightly different to its competitors. It’s starting to feel its age, though.”

These days, a car needs to be exemplary to compete in the hugely competitive small family hatchback class. While the Renault Megane has its plus points, rivals in the shape of the Skoda Octavia, Ford Focus and Vauxhall Astra are all starting to pull away as the Megane begins to feel its age. That said, a new model is on its way very shortly.

However, the Megane does still excel in a few areas. It rides nicely and feels well put together, while its engines are generally powerful and will prove cheap to run. The best in this regard is the 109bhp 1.5-litre diesel, which will return nearly 80mpg and emits just 93g/km of CO2. This makes it exempt from road tax and places it into one of the lower Benefit-in-Kind (BiK) company-car tax brackets. It’s not quick, though, taking 12.1 seconds to do 0-62mph. 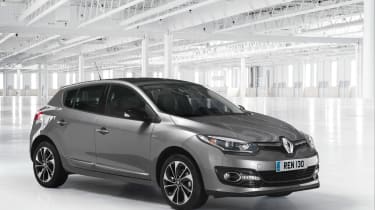 The quickest and most expensive Megane to run (apart from the high-performance Renaultsport versions) is the GT Nav 220. This packs 217bhp and will do the 0-62mph sprint in just 7.6 seconds. It does, however, emit 167g/km of CO2 and returns around 38mpg. This means a hefty £205 annual tax bill.

All models come reasonably well equipped, with even entry-level Expression+ cars getting Bluetooth phone connectivity, cruise control, electric mirrors and alloy wheels. You have to step up to the next trim – Dynamique Nav – before you get satellite navigation, however. 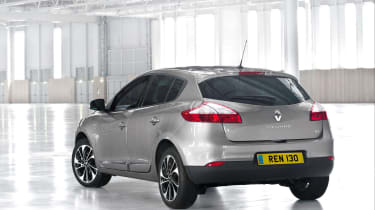 It’s in the safety stakes where the Megane really feels its age, however: Euro NCAP awarded it just four out a possible five stars. Most of its rivals got the full five and the Megane was mostly penalised for poor safety assistance – meaning it doesn’t come with much collision-avoidance technology as standard. That said, you still get six airbags, as well as the mandatory stability control, anti-lock brakes and traction control.

Renault’s reputation for reliability and build quality isn’t the strongest, but this Megane isn’t too bad. It came 94th (out of 200) overall in our 2015 Driver Power customer satisfaction survey and a decent 92nd for reliability.