The Renault Megane has decent handling and is pretty comfortable

If you drove the previous-generation Megane, you'll be pleased to know Renault has improved the ride and handling immensely with the current model. The Renault Megane is now enjoyable to drive, thanks to accurate steering and plenty of grip in corners. However, basic models aren't as much fun to drive as the GT version, which comes with sports suspension. Either way, both the front-seat passenger and driver will proceed in comfort. 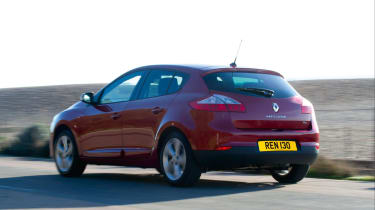 The lack of a powerful Renaultsport version (the current Renaultsport Megane is based on the Megane Coupe) means only one Megane hatchback is quick – the GT 220, pictured above – with most of the rest of the range range taking more than 10 seconds to go from 0-62mph. The GT 220 uses 220bhp to hit 149mph and accelerates from 0-62mph in 7.6 seconds. Running on performance tyres and with upgraded components all round, this is one of the least expensive performance Renaults and one of the fastest hatchbacks for the price.

An automated manual gearbox can be fitted to the 1.5-litre diesel and the 1.2-litre petrol engines, but it's slow to operate and not as much fun to use as the manual, so only choose it if you have to.

The basic 1.6-litre petrol can get from 0-62mph in 10.5 seconds, while the more hi-tech 1.2-litre TCE petrol is actually slightly slower, taking 10.9 seconds. The TCe 130 is usefully quicker, taking 9.7 seconds to do the same sprint. Of its rivals, the Peugeot 308’s petrol engines don’t perform well and are best avoided, while the Ford Focus offers a wide range of engines, from the sluggish entry-level 1.6 to some pleasingly powerful-feeling turbo petrols.

The diesel models are quite slow – the 1.5-litre version can only manage 0-62mph in 12.1 seconds. The fastest model of all is the 1.6-litre diesel, which can do 0-62mph in 9.8 seconds. Elsewhere, the Peugeot 308 1.6-litre 120 diesel offers similar performance off the line, but boasts fuel economy that tops 90mpg.