The Renault Megane range starts at around £17,000 and can cost almost £22,000 in higher specification with an automatic gearbox fitted. On average, this makes it cheaper to buy than the Ford Focus. However, at its most fuel-efficient, it beats the equivalent Focus by almost 3mpg.

Resale values aren't good – if you sell your Megane after three years of ownership, you could get as little as 35% of its original value back. The five-door Volkswagen Golf, in contrast, will likely retain 45-50%.

The cheapest Renault Megane to run is the 1.5-litre diesel. It can return fuel economy of 80.7mpg (when fitted with stop-start technology) and has CO2 emissions of just 90g/km, for free road tax. The more powerful 1.6-litre diesel claims fuel economy of 70.6mpg, while road tax is just £20 a year. 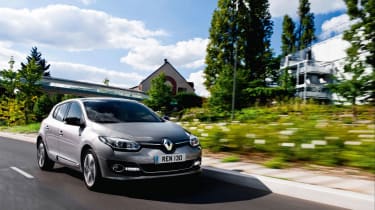 Insurance for all five-door Meganes should be cheap and ranges from group 13 for the 1.6-litre petrol to group 17 for the 1.6-litre diesel. Whether or not this works out cheaper to insure than rivals depends on how much power you're after. The Peugeot 308 starts at a modest group 9 for its low-powered entry-level 1.2, but its mid-range models are comparable to the Megane. It's a similar story for the Vauxhall Astra.

All new Renaults come with a four-year/100,000-mile warranty, which is better than the standard three-year warranties offered by Ford, Vauxhall and Peugeot.

If you buy the car through Renault's own finance scheme, it comes with the Renault 4+ pack. Worth up to £1,000, this includes four years of roadside assistance and four years of free servicing on top of the four-year warranty. This may prove very useful given Renault's sometimes-poor showings in customer satisfaction surveys.