The Renault Megane hatchback is a five-door car, so access to the rear is good, but the amount of space back there isn’t so hot. A boot that’s both fairly large and easy to use is welcome, although the space it offers isn’t class-leading.

While passenger space in the front of the Megane is fine, the same can’t be said for the back seats, where a low roofline means that six-footers will feel cramped. Legroom behind the driver’s seat is pretty modest, too. But families with younger children should find nothing to complain about.

Visibility in the Megane is mostly good, but seeing out the back window can be tricky. You can get around this by choosing the GT model, which has rear parking sensors as standard. 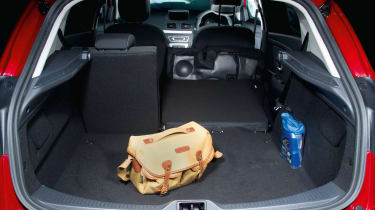 Some cubbies in the central console will hold smaller items, but storage spaces in general are a little thin on the ground and the car’s glovebox is small – criticisms we also level at the Peugeot 308. Bottles placed in the cup-holder get in the way of the stereo controls, which gets annoying.

The Renault Megane hatchback has a 405-litre boot, which is bigger than what you get in the Volkswagen Golf (380 litres) and Ford Focus (316 litres), although it's outdone by the Honda Civic (477 litres) and Skoda Octavia (590 litres).

If you need a Megane with even more space, you could always go for the Renault Megane Sport Tourer estate, which has a 524-litre boot.

The Megane’s boot also features a 33-litre hidden storage area under the boot floor. The 60:40 split-folding rear seats can be folded down to free up the maximum luggage capacity of 1,162 litres. The seats fold almost completely flat, which means is great for carrying larger items – however, there is a slight boot lip that you’ll have to lift heavy items over.