The Vauxhall Corsa is competitively priced, with lots of dealer offers on PCP finance deals and incentives. You get more kit as standard now, too, which makes the car better value than before. You’ll need to look elsewhere if you want a diesel supermini, though, because Vauxhall stopped sales of the diesel Corsa in April 2018, citing a lack of demand. 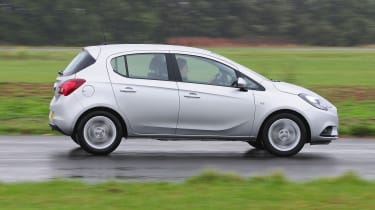 Cuts to the Corsa’s engine range mean there is just one petrol engine available in two power outputs. A 1.4-litre petrol is available with 74 or 89bhp and a manual gearbox – only the 89bhp version is available with an automatic. The most fuel-efficient model is the 89bhp 1.4-litre with stop/start which helps it achieve 44.1mpg and emit 123g/km of CO2, but the Benefit-in-Kind (BiK) rate for company-car drivers is quite high.

The manual 74 and 89bhp versions of the 1.4-litre Corsa without stop/start both return 43.5mpg and emit 128-131g/km of CO2 for a high BiK rating for a car of this size, while the automatic 89bhp version returns 38.2mpg, with CO2 emissions of 150g/km, so BiK is even higher. The automatic gearbox now has six gears, and is no longer an automated version of the five-speed manual gearbox. Still, we'd avoid it unless you're regularly in urban traffic or you need an automatic.

The Vauxhall Corsa is a firm favourite with driving instructors, leading plenty of first-time drivers to buy one because the car is familiar and relatively cheap. It’s also a solid choice for young drivers because of its low insurance rating, with the range kicking off in group three for the least powerful models.

Groups are the same for three and five-door versions, and Corsas with 74bhp sit in groups three to four for insurance; most of the rest of the engine range comes in below group 11, with the most powerful 148bhp model in GSi trim having a group 20 rating.

Vauxhall no longer offers a lifetime/100,000-mile warranty to its cars’ first owners. Instead you'll be covered for three years or 60,000 miles, transferable to subsequent owners if you haven’t exceeded either limit. You also get AA breakdown assistance with Homestart and full European cover for the first year. It’s also possible to purchase an extended warranty, for which numerous packages are available.

The Corsa's service schedule is once a year or 20,000 miles, whichever comes sooner. Sign up to Vauxhall Care (costing £19 per month for petrol models) and the first three services are covered, along with roadside assistance for three years and the first MOT.