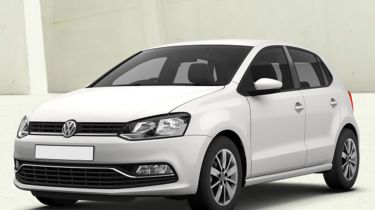 The Volkswagen Polo SE adds some choice luxuries over the rather basic S trim. Along with alloy wheels, the SE trim has the Composition Media System, which has a larger touchscreen, air conditioning, front and rear electric windows and a leather steering wheel. Other useful equipment includes an alarm and split-folding rear seats; basic amenities that you don't get on the entry-level S model.

You are given a choice of engines with the SE too. Along with a 1.0-litre petrol engine, there's also a 1.2-litre turbocharged TSI petrol engine and a 1.4-litre TDI diesel. The latter actually has a higher claimed fuel economy figure than the petrol-powered BlueMotion edition, as the diesel engine in the SE is capable of returning up to 83mpg, while the BlueMotion petrol engine is only listed at up to 69mpg. We explain why in the Volkswagen Polo BlueMotion review, found in the selector above.

Build quality is very typical of Volkswagen: robust. Practicality is also decent, as the addition of split-folding rear seats and a false boot floor means the rear space is more flexible, while the boot space on offer beats the Ford Fiesta for outright size. Pricing for the SE is largely in line with similarly-specced rivals. In fact, the Ford Fiesta Zetec is around £1,000 more expensive, but you do get a more rewarding driving experience if you choose the Ford.

The SE trim is about the right specification for those just looking for an easy-to-live-with hatchback. The equipment list may not be long, but the Polo SE is actually good value compared to some close rivals.The addition of split-folding rear seats and a movable boot floor only helps to make the Polo SE more practical than the basic S model.Build quality in the Polo is impeccable. The dashboard and interior materials are solid and of a really high quality, so they assure you that the Polo feels like a premium product.

The Polo may be wll built and practical, but it's hardly the most exciting hatchback choice. Its design is a little plain and its driving behaviour is beaten by the sharp handling of a Ford Fiesta.Although it may be cheaper to buy than the other engines on offer, the basic 1.0-litre petrol engine feels very underpowered. Unless you only plan on driving around town and don't do many miles a year, it's best left avoided.

The 1.2-litre TSI petrol engine is perfect for the Polo. Although the diesel grabs all of the fuel economy headlines, the TSI petrol engine's claimed 60mpg, along with the fastest acceleration time in the SE's engine options and annual road tax bill of just £20 are good enough reasons why it's a better all-rounder.