"The Volkswagen Polo GTI is very much at the sensible end of the hot-hatchback class. It’s quick and decent to drive, but rivals are much more fun"

The Volkswagen Polo GTI is the supermini hot hatchback for those who like their performance cars with a dose of subtlety and restraint. It uses a punchy 189bhp turbocharged 1.8-litre petrol engine for some impressive straight-line speed, but wears a more muted bodykit than most of its direct rivals, with only large alloy wheels, twin exhaust pipes and GTI badges hinting at its sporty credentials.

The Polo GTI was introduced long after the iconic Golf GTI made its debut, and it’s never really made its mark on the class like its bigger and more illustrious stablemate. That’s partly because there was far more competition around when it was eventually launched – and now the Polo GTI has rivals such as the Ford Fiesta ST, Peugeot 208 GTI, Vauxhall Corsa VXR, Mini Cooper S and Renault Clio RS to contend with.

Compared to these alternatives, it’s clear the Polo GTI’s conservatism carries over from its appearance into the driving experience. While it feels stable and smooth on a twisty road, it’s less rewarding to drive quickly than many rivals and this makes it hard to recommend, when buyers of a car like this usually have ‘fun’ high up their list of priorities. 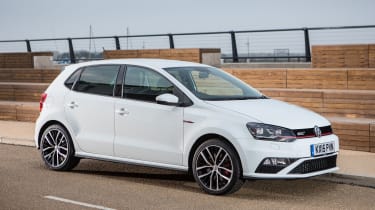 The intended ‘grown-up’ feel of the Polo does manifest itself more successfully inside, where the upmarket feel and ergonomic layout of the standard car is given the traditional GTI tartan-upholstered sports seats, ‘golf ball’ gearstick, red stitching and flat-bottomed steering wheel.

The 189bhp 1.8-litre petrol engine powers the Polo GTI from 0-62mph in 6.7 seconds, which beats the Ford Fiesta ST’s time by two tenths. There’s little doubt the VW feels quick when you put your foot down, but this doesn’t make up for the fact that the Ford is much more fun on a twisty country road, even if it’s slower on paper.

Unlike many of its rivals, the Polo GTI is available as three or five-door hatchback and with either a six-speed manual or DSG automatic gearbox. If there’s a particular combination of bodystyle and gearbox you want from your hot hatchback, it may be that the Polo GTI is one of the few cars in this class that can provide it. The five-door naturally provides more practicality than three-door rivals, but we’d recommend sticking with the manual gearbox, as it’s cheaper and more fun to use. 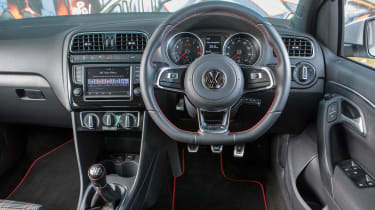 The Polo GTI won’t cost the earth to run, either, and it beats most of its rivals when it comes to running costs. It emits 129g/km of CO2, which means an annual road tax bill of just £110, while it should return up to 50.4mpg if you drive sensibly.

As with the rest of the Polo range, the GTI commands a premium price to go with its desirable badge. The cheapest Polo GTI costs the same as a top-spec Ford Fiesta ST-3, and they both come with a similar level of equipment. For this you’ll get a touchscreen infotainment system, DAB radio, Bluetooth and cruise control, but you’ll still need to pay more for luxuries like sat-nav and climate control.

What buyers will be looking for, though, is the most involving driving experience. For that, you’ll probably need to look elsewhere, because the Polo GTI just isn’t quite as fun to drive as its rivals. It feels very fast and it’s a very relaxed cruiser, but it’s also lacking a bit of excitement that you’ll want from a car like this.

The standard Volkswagen Polo finished 59th out of the 75 cars ranked in our 2017 Driver Power owner satisfaction survey of cars currently on sale in the UK.