The Volkswagen Polo GTI provides plenty of power and grip, but rivals are more fun to drive

The Volkswagen Polo GTI feels more grown-up than most of its rivals. Where cars like the Ford Fiesta ST and Renault Clio Renaultsport wear their hard-edged driving experience on their sleeves, with firm suspension and loud exhausts, the Polo is far more restrained.

That makes it an interesting prospect for drivers who are happy to sacrifice the last few drops of driver engagement for something that’s a little more comfortable from day to day.

We say ‘a little’ more comfortable, because the Polo GTI is still a hot hatch, meaning that its target buyers expect a more sporty drive than the basic Volkswagen Polo. The GTI features lower and firmer suspension and a clever XDS electronic differential, which can brake the inside front wheel when cornering at speed to improve grip and stability. It’s a system borrowed from the Volkswagen Golf GTI and works very well, allowing the car to catapult out of corners. 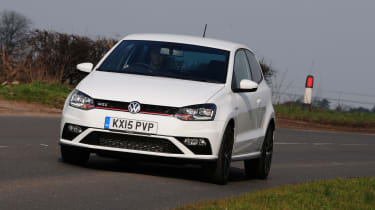 There’s an optional sport pack available, which allows the driver to alter the suspension’s firmness, add weight to the steering and improve the accelerator pedal’s response. It certainly makes the car feel more alert, but the suspension could prove too firm for UK roads. We think it’s best to stick with the standard setup.

There’s only one engine available in the Polo GTI range – a 1.8-litre turbocharged petrol that develops 189bhp. All that power in a small car means that performance is brisk, with 0-62mph covered in 6.7 seconds and a 139mph top speed possible.

The engine is smooth and quiet at a motorway cruise, with a sporty rasp evident when the car is at tickover or being pushed hard. The way the car produces its power means that overtaking is easy and safe.

There’s also the choice of a six-speed manual gearbox (fitted as standard) or a seven-speed DSG automatic transmission for an additional £1,250. The automatic features shift paddles on the steering wheel, but still works well if you leave it in drive and let it change gear itself. It makes fast, decisive shifts, and as an added bonus, the exhaust rasps when you change up a gear at speed.

The automatic is far better than that offered in the Renault Clio Renaultsport, meaning the Polo GTI is the top choice for buyers seeking a two-pedal hot hatch. But for all its clever technology, we still prefer the six-speed manual transmission, as it suits the character of a car like this a bit better.