Despite the performance on offer, the Volkswagen Polo GTI is practical for small families

With a choice of three or five-door hatchback bodystyles, there’s more flexibility with the Volkswagen Polo GTI than you’ll get with a Ford Fiesta ST or a Renault Clio Renaultsport. That’s because the Fiesta is a three-door only model, while the Clio only has the option of five doors.

Unlike models such as the Vauxhall Corsa, there’s no negative impact on boot space should you choose the more sporty looking three-door model.

Like its rivals, the Polo GTI has compact dimensions that mean it’s easy to park in tight spaces and steer down crowded city streets. Visibility is good, too, so you should be able to live without the optional parking sensors without worrying about scraping those bumpers.

There’s plenty of space inside the Polo GTI for both people and possessions. There’s enough headroom and legroom in the front for all but the tallest adults, and two more adults can travel in the back without too much hassle. 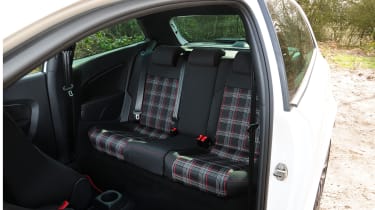 Although there’s a seatbelt for a third passenger in the back, they won’t thank you too much for taking them along – there’s not much room back there and the raised transmission tunnel means there’s nowhere for them to put their feet. In fairness, that’s typical for cars of this size.

Getting in the back of the five-door model is easy and only slightly trickier in three-door models. That’s because the front seats tip forward and slide to improve access.

There’s plenty of storage around the interior, including a large glovebox, deep door pockets and cup-holders. The Polo GTI has a central storage console with a lid placed between the front seats, as well as a hidden drawer under each front seat.

The VW Polo GTI has a 280-litre boot, regardless of whether you choose a three or five-door model. That means it’s fractionally larger than the Ford Fiesta ST’s, but smaller than the Renault Clio Renaultsport’s. 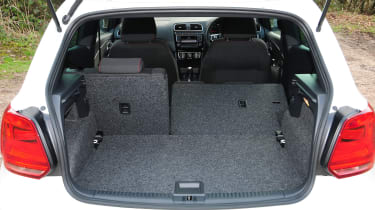 The rear seats split and fold to reveal 952 litres of room in total, and you get a false floor allowing you to tidy rarely used items out of the way. There’s also a flat floor and a reasonably low – and wide – lip to lift luggage over. Useful kit includes a shopping bag hook, a 12v power socket and a light.

Few will buy a Polo GTI with towing in mind, but it can still pull a braked trailer weighing up to 1,100kg, or a 640kg unbraked trailer.