The Volkswagen Polo GTI is reasonably cheap to run, but expensive to buy

The VW Polo GTI is an upmarket model and demands an upmarket price as a result. It’s priced from almost £19,000, while there’s a £600 premium for a five-door model and £1,250 for an automatic gearbox.

Nevertheless, that shouldn’t cost you too much in the long run, as the Polo will retain more of its value on the used market. Experts predict it’ll retain some 49% of its purchase price after the first three years or 36,000 miles of ownership, which is better than the Renault Clio Renaultsport (46%) and Ford Fiesta ST (44.5%).

Given the Polo GTI’s performance, the promise of more than 50mpg fuel economy is impressive. It’s worth remembering that in any car – especially performance models – you’re unlikely to come close to the claimed figures if you exploit the car’s potential to the full.

Volkswagen says the Polo GTI is capable of returning 47.1mpg when fitted with a manual gearbox. In this form, CO2 emissions are claimed to be 139g/km, which means an annual road tax bill of £130. 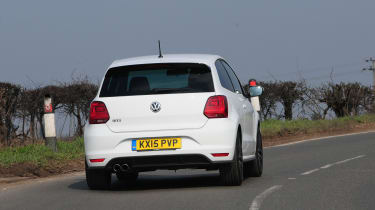 Models fitted with the automatic DSG gearbox are more efficient. With this seven-speed gearbox fitted, fuel economy is boosted to 50.4mpg, while CO2 emissions fall to 129g/km for a road tax bill of £110 a year.

But we wouldn’t recommend choosing the automatic model purely as a way to save money – it costs more than £1,200 extra to buy in the first place, so you’ll have to cover many miles and keep the car for many years to recoup that additional outlay.

In comparison, the Ford Fiesta ST manages 47.9mpg economy and has CO2 emissions of 139g/km, while the Renault Clio Renaultsport records 44.8mpg economy and emits 144g/km of CO2.

Insurance groups for this Polo GTI are yet to be established, but it’s unlikely that cover will be cheap for young or inexperienced drivers. Volkswagen offers complimentary seven-day cover for all new models.

All Volkswagens come with a three-year/60,000-mile warranty. The first two years of cover are actually unlimited mileage, but a 60,000-mile cap is applied in year three. There’s also 12 years of cover against rust holes and three years’ paintwork cover.

Volkswagen offers two service plans, depending on how many miles a year you intend to cover. Fixed Service is aimed at drivers who drive less than 10,000 miles a year and tend to do lots of short start-stop journeys. Flexible Service is for drivers covering between 10,000 and 20,000 miles a year on longer-distance runs.