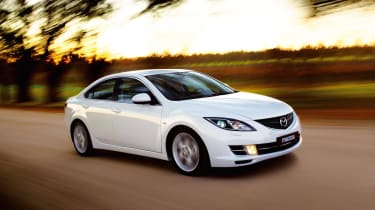 With the relentless rise of crossovers and SUVs, conventional large cars like the Mazda6 are falling out of favour. However, if you're looking for a spacious and user-friendly car that offers something a bit different, then the Japanese machine is well worth a look.

The Mazda6 Mk2 came as a five-door hatch or four-door saloon and there was also a Mazda6 Estate.Whichever model you choose, you'll get a large family car that handles like a model half its size, and while the engines aren't the most efficient around, they're still pretty reasonable for running costs.

This Mazda6 Mk2 arrived in 2008 and was the second generation of the 6 range: before that, Mazda offered the 626, which can trace its roots in the UK back to the late '70s. Over the years, the Mazda 626 and later Mazda6 have been offered in four-door saloon or five-door hatchback form and the Mk2 Mazda6 was offered in both formats, although the saloon range wasn't as big as the hatchback's and it was dropped in 2010 due to poor sales. There was also an estate version available from launch, although it only had a marginally larger boot than the hatchback. 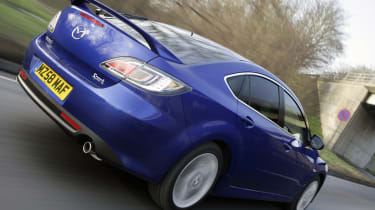 Engines at launch comprised 1.8, 2.0 and 2.5-litre four-cylinder petrols and a 2.0-litre diesel. The petrol engines were on sale throughout the Mazda6's life, while a larger 2.2-litre diesel replaced the 2.0-litre in 2009 and was offered in three power outputs. While there was a wide range of engines, gearbox choice was limited to a five-speed manual for the 1.8-litre and six-speed manuals for the rest of the range, while the only engine offered with an automatic was the 2.0-litre petrol.

The range comprised S, TS, TS2, SL and Sport trims, although not all engines were available in all variants. Mazda also offered some limited-run models with extra kit, such as the Tamura, Venture and Takuya. A facelift in 2010 gave the nose a sharper look and updated the interior trim, while the current Mazda6 arrived as a four-door saloon and Tourer estate at the end of 2012, replacing the Mk2 in the UK.

Which is the best Mazda6 model for me?

The most common bodystyle for the Mazda6 Mk2 is the hatchback, and it's the version we'd go for, as it was offered in the most variety of trims. While the rear windscreen has a similar rake to the saloon's, you get a useful rear wiper as standard. What's more, the boot capacity of 510 litres is only nine litres smaller than the Mazda6 Estate's.

The 1.8-litre petrol delivers modest performance, so if you can afford the 2.0-litre, it's a better proposition. However, neither is particularly economical, so we'd recommend any diesel over both of them. 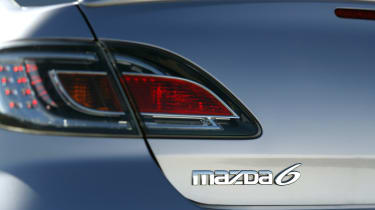 The 138bhp 2.0-litre diesel used at launch isn't great, so if you can afford a 2.2-litre, definitely go for it. It came in 123, 161 and 177bhp forms, although the latter only appeared in Sport trim, but all three are responsive. Sport models also had exclusive use of the 167bhp 2.5-litre four-cylinder petrol engine, although this is thirsty and not as good as the diesel – and certainly no replacement for the rapid Mazda6 MPS from the previous generation.

While petrol power dominates early models, the later 2.2-litre diesel delivers the best all-round performance of all the engines on offer. The 1.8-litre petrol has claimed economy of 40mpg and 162g/km CO2 emissions, which dropped to 155g/km by the time the Mk2 was replaced, while the 2.0-litre petrol emits 168g/km and returns 39mpg, which is only slightly poorer. The 2.5-litre petrol has emissions of 192g/km, so road tax is pricey, and claimed fuel economy of 34mpg. The 2.0-litre petrol automatic isn't great, either, at 182g/km and 36mpg. 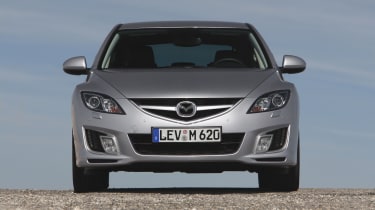 Go for a diesel and the 2.0-litre emits 147g/km and returns 50mpg, but the larger 2.2-litre matches it, irrespective of which of the three power outputs you go for. Economy of 51mpg is similar, too, but that's not particularly impressive when compared to the Mazda6's main rivals.

Mazda dealers aren't the most competitive when it comes to service costs, falling somewhere between household brands such as Ford and Vauxhall and premium marques such as BMW and Audi with their charges. Intervals are 12 months or a rather short 12,500 miles, while the 2.2-litre diesel has a timing chain, so unlike the 2.0-litre, there's no cambelt that needs changing.

The Mazda6 is was designed to appeal to fleet buyers and there will be high-mileage examples out there in mid-range TS and TS2 trims, while the Business Edition was geared to fleet users especially.

Despite this fleet appeal, the Mazda 6 has a sporty drive that might not be to all tastes. There's a firmness that sets it apart from rivals, especially if you go for the top-spec Sport model, which gets lowered suspension and bigger wheels. 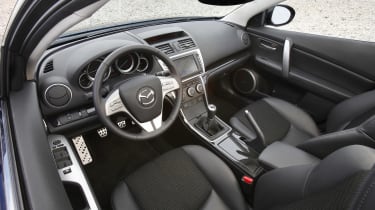 While Mazda is perceived to offer great reliability because it's a Japanese firm, its cars aren't quite as dependable as models from rivals such as Toyota and Honda. We've heard of electrical issues with this generation of Mazda6, while the 2.0-litre diesel has particular trouble with its diesel particulate filter clogging, even if the car has been taken for a long, high-speed run to get the soot dislodged.

While the 2.2-litre diesel has a cam chain rather than a belt, we've heard reports of the chain losing tension, which can result in major repair work under the bonnet. And as Mazda dealers aren't the best value, it'll be an expensive repair.

Higher-spec models featured a blind-spot detection system from 2009 onwards, but it's not very accurate: you may see the orange warning lights in the door mirrors illuminate even if passing cars aren't anywhere near you.

If you want proof that Japanese cars are more reliable than their European counterparts, then look no further than the recall list for the Mk2 Mazda 6. While reliability might be open to question, there has only been one safety recall issued against the car and it only affects 161 cars, built between January and February 2008 and powered by the 2.5-litre petrol engine. The recall bulletin notes that the clips retaining the piston pins may not have been fitted correctly during assembly, with the end result being engine failure.

There's plenty of choice if you want a family car and thanks to their decreasing popularity in the face of competition from crossovers and MPVs, you can get a lot of car for your money. The Ford Mondeo is a relative of the Mazda6 Mk2 and there are plenty out there to choose from. The Vauxhall Insignia also offers a lot of car for the money, while the Volkswagen Passat is a sensible option, although it commands a premium over the Mazda. If you want a VW Group offering, then the Skoda Superb delivers decent running costs and limousine-like space in the back.

The Citroen C5, Renault Laguna and Peugeot 407 go for lower prices than the Mazda, although all three have reliability question marks. If dependability is a major requirement, then the Toyota Avensis won't let you down, although it's a relatively mundane choice. A better bet is the Honda Accord, which delivers good performance and quality for a similar price.

All of these rivals are available in estate form, with the Mondeo and Superb offering the most amount of space for your money.

The Mazda6 Mk2 is a car that flies under the radar, but it's something of a hidden gem. Top-spec cars are well equipped, while the 2.2-litre diesel is a strong performer, whichever power output you choose. It's a pity that the only automatic option is the 2.0-litre petrol, but then the six-speed manual found in most cars helps to contribute to the car's sporty character. 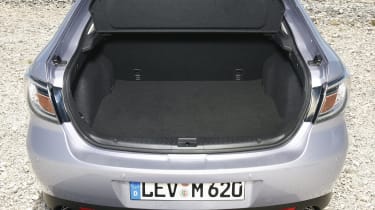 If you can live with its firm ride, the Mazda6 is enjoyable to drive, with sharp handling and great performance, although running costs aren't the best in the class. The hatchback has plenty of passenger space, while the boot is big enough to make the estate version seem excess to requirements.