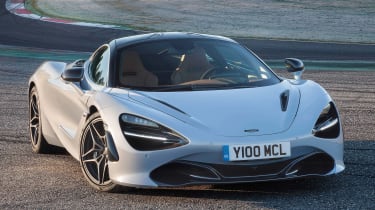 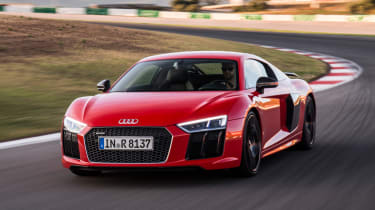 The Audi R8 is among the handful of cars here that you could realistically drive everyday. Now in its second generation, the years have dulled the R8’s visual impact – you might even call it understated – but there’s no doubting its depth of ability.

You can choose from two versions of a 5.2-litre V10 developing 533 or 602bhp. Before anyone dismisses the R8 as a big, expensive Audi TT, remember that the R8’s engine is also fitted in the Lamborghini Huracan.

There’s no manual gearbox available, but the seven-speed automatic gearbox offers super-quick shifts. The R8 has a four-wheel drive system that can send power to the front or rear wheels as required, making it easy to drive very quickly indeed. At higher speed, you’ll be grateful for the sharp steering and taut chassis, which help keep the car stable.

Inside, the R8 couldn’t be further removed from the complexity of the Ferraris on this list; many of the controls will be familiar to anyone who’s recently driven an Audi A3 or Audi A4. 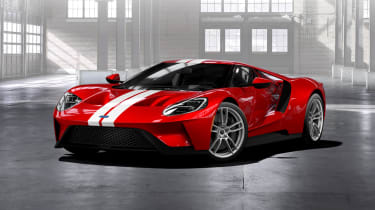 Ford is a manufacturer synonymous with everyday cars but not so much with supercars. It’s worth remembering that its original supercar, the GT40, won the Le Mans 24-hour race four times in succession in the 1960s. In 2005, the Ford GT was introduced as homage to the original, and in 2016 the latest version was launched 50 years after that original Le Mans victory.

There’s no doubting the new Ford GT’s credentials. It’s constructed from lightweight carbon fibre and is powered by a 3.5-litre EcoBoost engine – from the same family as the 1.0-litre three-cylinder engine you’ll find in a Ford Fiesta. Admittedly no one outside of Ford has driven the 2018 Ford GT yet, but with the initial two-year production run being doubled to four, there are no shortage of buyers agreeing with us that it is one of the year’s most exciting cars.

What we do know is that it looks sensational, with active aerodynamics, suspension inspired by race cars and dihedral lifting doors. It’s unlikely to disappoint. 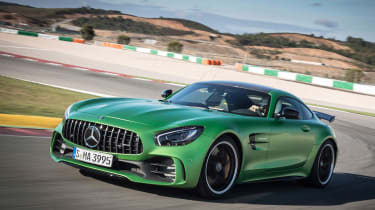 Taking a car that’s already very quick and making it faster and more track-focused is a common recipe for supercar success. The Mercedes-AMG GT R is a prime example of the breed, taking the standard GT and adding more power, racier bodywork and a sharper, track-optimised driving experience. The result is a car that looks like it belongs on the starting grid of Le Mans.

It sounds the part, too, with an uprated titanium exhaust system that emits a trademark AMG rumble, as well as playing a part in the power increase from 515bhp in the GT S model to 577 in the GTR. The twin-turbocharged 4.0-litre V8 is a brutish engine that suits the GT R’s racey character perfectly.

If you like to unleash your six-figure supercar at trackdays, the Mercedes-AMG GT R is a great alternative to the more obvious choices like the Porsche 911 GT3. It’s not a bad road car, either – adjustable suspension and traction control mean that the car can be configured to suit your mood or the road at hand.

Remarkably, the GT R actually rides better than the standard car, even in its most extreme setting. It may be a hard-edged supercar built by AMG for the track, but this is still a Mercedes at heart – useable, high-quality and very well built.

Read on to discover the rest of the world's best supercars, including models from BMW, Lamborghini and Honda.