"Dear Carbuyer, I've got £25,000 for a fast prestige SUV that won't cost the earth to run. What do you recommend?" 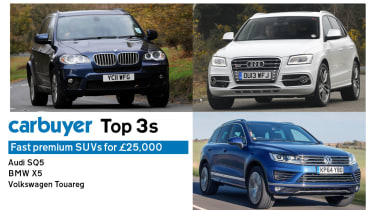 For almost as long as SUVs have been sold, there has been a market for high-performance versions. Today, there are sturdy-looking SUVs that can leave sports cars for dust in a straight line – cars like the Porsche Cayenne Turbo S, the Mercedes-AMG GLE 63 and Bentley Bentayga will challenge a Ferrari when sprinting from the lights, and even Lamborgini has got in on the action with its sensational Urus SUV.

Getting this much speed out of an SUV results in huge fuel bills, though, and that can rather put a dampener on the fun. Fortunately, if you descend the performance ladder just a couple of rungs, there are a few rather more wallet-friendly SUVs that are still quick enough to make you smile, and some can be bought for the price of far more prosaic cars. 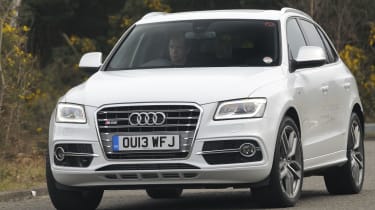 While the very fastest SUVs you can buy are powered by big petrol engines, it's no secret that certain diesel-powered models are rapid in their own right, and burn a lot less fuel for every mile travelled. The Audi SQ5 is a prime example, with a twin-turbocharged V6 diesel engine that produces 335bhp – enough for a 0-62mph time of just 5.1 seconds, with 40mpg claimed to be possible if you drive with rather more restraint. We found a 2013 example with 65,000 miles for £23,990. 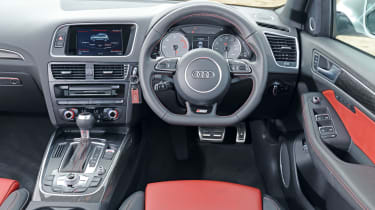 The SQ5 lives up to the Audi badge on its nose, with a smartly designed interior that's beautifully put together, and high-quality materials abound. The SQ5 is smaller inside than the BMW and VW we'll come to soon, but a family of four should have little cause for complaint. The 540-litre boot is the smallest here, too, but should still prove adequate for most. The SQ5 has proven generally reliable, but you can expect servicing and maintenance bills to be rather high, especially if all that power is frequently used. 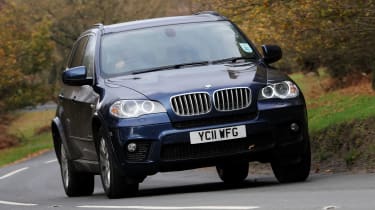 When BMW launched the X5 almost two decades ago, it was keen to preserve its 'Ultimate Driving Machine' image, and the brand's first SUV was lauded as being very car-like to drive. Today, most rivals have caught up, but the X5 is still a great car to drive. Its bulky form is betrayed by slightly numb response from the steering, but the ride is smooth and there's remarkably little body lean in corners. The 40d diesel is very fast, too; we found a 2013 example with 62,000 miles for £23,490. 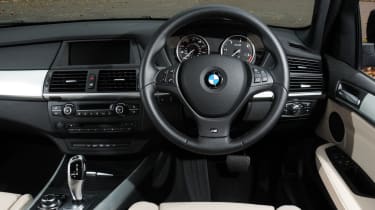 Inside, the X5 isn't as sleek as the SQ5, but the materials used are top-notch and there's plenty of interior space, with a seven-seat option that big families will appreciate. Fold the third row of seats away and there's 620 litres of boot space. Many will enjoy the X5's elevated driving position, too. A reasonable 35mpg is possible and reliability is generally good, although niggling electrical faults have been reported. Maintenance costs should be marginally lower than the more performance-focussed SQ5. 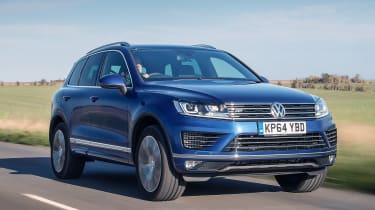 For: Smooth, refined and frugal, loads of kitAgainst: Slower than others here, lacks prestige

The Volkswagen badge is arguably a little less prestigious than the BMW roundel or four Audi rings, and this works to the buyer's advantage: you get a lot more SUV for your money. The Touareg isn't exactly a budget buy, either – it shares its underpinnings with the Porsche Cayenne and certainly doesn't disappoint where it comes to quality. We found a 64-plate example of the sporty Touareg R-Line with the 258bhp V6 diesel engine and 48,000 miles on the clock for £20,500. 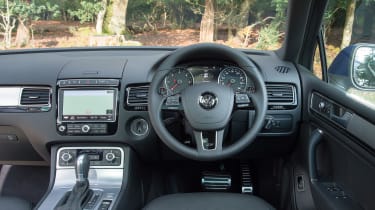 The Volkswagen Touareg isn't quite as well appointed as the Audi SQ5 inside, but the materials used are mostly of a high standard. There's almost as much interior space as the X5, too, but no seven-seat option and a smaller 580-litre boot. Although the first-generation Touareg developed a reputation for expensive mechanical faults, the second generation is seen as quite dependable, and servicing costs should be a little lower than the BMW and Audi. Regular maintenance is essential, though, so steer clear of any Touareg without a full and detailed service history.