It's not the most exciting car in its class, but the Toyota Auris is one of the best-built. In the past few years, Toyota has undertaken a series of large-scale recalls, but the company's swift action appears to have been rewarded with excellent customer feedback – dull driving experience notwithstanding. Safety in the Auris is also strong – all models come with the Toyota Safety Sense package as standard. 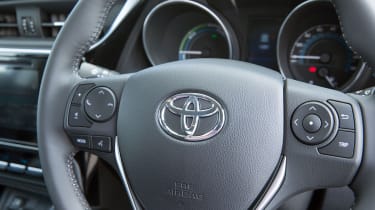 Safety Sense features autonomous emergency braking, which can alert the driver or apply the brakes should a collision be detected. The system can also 'read' road signs, and displays them on the car's information display.

The Toyota Auris came 20th overall in our 2018 Driver Power owner satisfaction survey of the top 75 cars currently on sale in the UK. Of the owners who responded, 8% reported experiencing an issue or fault with their car at least once in the first year. Fuel consumption and running costs were praised by owners, as were its engines and gearbox. Crucially, the Auris also came 11th for reliability and build quality. It's also worth noting that the hybrid model's batteries are covered by an eight-year warranty.

Seven airbags and electronic stability control helped the Auris score the maximum five stars in the Euro NCAP crash tests. During the evaluation, the passenger compartment remained stable and the Auris was also praised for its ability to protect small children. It also offers two ISOFIX child-seat mounts on the outer seats in the back and has a seatbelt warning buzzer that covers the front and rear seats.

In mid-2015, Toyota began offering an optional 'Toyota Safety Sense' pack as an option on the Auris, and it became standard across the range from late 2017. It comprises autonomous emergency braking that scans the road ahead and brakes automatically to prevent an impact, adaptive cruise control to maintain a safe distance to the car in front on the motorway, lane-departure warning and auto-dipping high-beam headlights.