Frugal diesel, but the petrol-electric hybrid Auris is the model to go for

There are only two Toyota Auris engines to choose from and neither is very expensive to run. The fairly modern 1.2-litre turbocharged petrol can manage 58.9mpg and emits 112g/km of CO2 for a competitive 23% Benefit-in-Kind (BiK) company-car tax liability, while those who seek greater economy and lower emissions can choose the the petrol-electric Toyota Auris Hybrid. Its 78.5mpg claimed fuel consumption and 19% BiK impresses – even if its CVT automatic gearbox doesn’t. The hybrid’s regenerative braking system – which stores the energy that would otherwise be wasted during braking – also reduces wear on the brakes to lower maintenance costs. 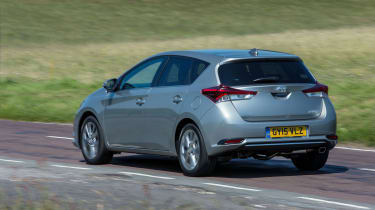 After the first year's CO2-based road tax (generally included in the on-the-road price), all petrol Toyota Auris’ cost £140 a year to tax, while the Hybrid costs £130 annually.

Insurance should be reasonably affordable, with the Auris starting from group 12. The Toyota shouldl cost about the same to insure as a similarly specified Ford Focus or Volkswagen Golf.

Maintenance costs for the Toyota Auris start from around £150 for an intermediate service and around £250 for a full service. Toyota also offers service plans, which allow you to spread the cost of servicing over small monthly payments, but prices are set by your local dealer.