The Toyota Auris offers decent practicality, but it’s not class-leading

One thing that marks the Toyota Auris out from the competition is its flat floor, which means there’s no transmission tunnel to eat into foot space. Rear-seat passengers will also like the Auris’ reclining seats, while the boot is flat and well shaped. There’s not much to separate the Auris from the competition, though – boot space isn’t class-leading and neither is rear legroom.

There’s plenty of space in the front seats for tall adults, and the Auris also has a huge number of cubbyholes – including a large glovebox, door pockets, big cup-holders and a useful additional storage area in the centre console. 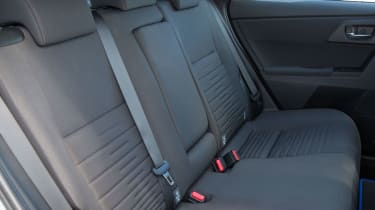 Space in the back of the Auris isn’t class-leading, but unlike most of its rivals, it has a flat floor in the back instead of a raised transmission tunnel. This means the passenger sitting in the middle of the back seat has somewhere to put his or her feet. The optional panoramic sunroof cuts into rear headroom slightly but not enough to affect the average adult passenger. The Auris’ rear bench also reclines slightly to offer extra comfort or it can be placed upright for extra boot space.

The well shaped boot's large opening and low loading lip make it relatively easy to lift heavy items in. Capacity is 360 litres (20 litres less than the Volkswagen Golf offers), but the seats in the back can be folded nearly completely flat (to reveal a total load capacity of 1,176 litres) thanks to an adjustable floor that flattens out the step caused by the seats. 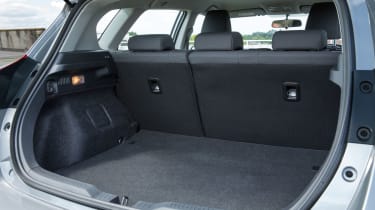 The back seats also split 60:40 so that you can carry large items with space for two backseat passengers, and the false floor means there is somewhere to hide valuables. While the Auris’ boot isn’t class-leading it does offer useful extra capacity over the 316-litre boot you get in the popular Ford Focus.