The Vauxhall Adam is great for short hops, but a small boot and rear seats rule out longer-distance adventures

The Vauxhall Adam is only available as a three-door hatchback and its sloping roofline robs headroom from those sitting in the back. 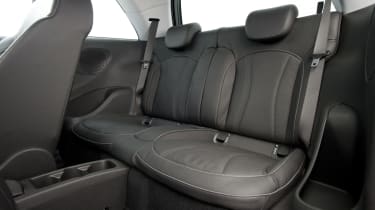 The good news is the front seats offer plenty of space, but just like most chic city cars, such as the DS 3 and Fiat 500, the rear seats don’t have much head or legroom, so they’re only suitable for occasional use or carrying shopping bags.

You’re reasonably well catered for while driving, with usefully sized door pockets that can hold medium-sized bottles of water. There's also a pair of cup-holders, a large cubbyhole in front of the gearstick and a larger glovebox than you’ll find in a Fiat 500.

Visibility can be a problem, though, as the Adam’s stylish curved roofline places thick door pillars either side of the windscreen and behind your head.

At least it’s easy to get comfortable behind the wheel, with plenty of adjustment in the driver’s seat and a steering wheel that adjusts in and out as well as up and down – a feature that’s not a given on cars like this.

At just 170 litres, the Vauxhall Adam's boot is small, even for a city car’s. The Fiat 500 has 185 litres of luggage space, while the MINI has 211. The Adam also has a high loading lip and a narrow boot opening, making it tricky to load items larger than a rucksack or carry-on suitcase. 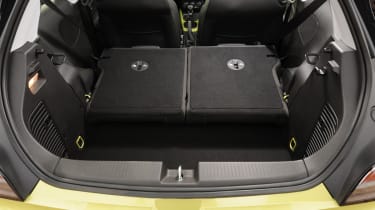 The rear seats split 50:50 and fold forwards, increasing space to 663 litres. Like its rivals, the Adam is definitely a car designed for nipping around town, not going on holidays.