The Vauxhall Adam offers lots of grip, but dull steering and a firm ride spoil the fun

With relatively large wheels for its size, the Vauxhall Adam has lots of grip. Unfortunately, its unresponsive steering means it doesn’t offer the same sort of connection between the driver and tyres you find in the (admittedly more expensive) MINI hatchback or even a Ford Fiesta.

Fortunately for enthusiastic drivers, the Adam S features suspension and brake parts from the fast Vauxhall Corsa VXR hot hatch and these considerably sharpen up the handling compared to the standard model. Even so, these changes fail to create a car that can beat the brilliant Ford Fiesta ST.

The Adam also struggles with bumps, as the ride is too firm and bouncy, particularly with larger 17 or 18-inch alloy wheels fitted. The Adam is at its best in town, where it feels agile and nippy and its compact dimensions are particularly useful. 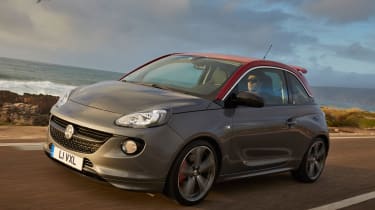 If you want a diesel engine in your Vauxhall Adam, then you’re out of luck. But at least you can have an automatic gearbox with the 1.4-litre petrol engine.

With the 1.2-litre engine, performance is lethargic at best. You need to work this engine hard to get close to its near-15 second 0-62mph time and it’ll make a great deal of noise when you do so.

Our top pick of the engine range is the 1.0-litre three-cylinder turbocharged petrol, which makes 113bhp and hits 62mph from rest in just under 10 seconds. Not only is it the most powerful of all the standard Adams, it’s also the quietest. Plus, overtaking doesn’t require the same careful planning as it does with other engines.

If you want a faster Adam, go for the Adam S, which boasts 148bhp thanks to a turbocharged 1.4-litre petrol engine, giving it a top speed of 124mph and a 0-62mph time of just 8.5 seconds. However, it’s only slightly less expensive than the even sportier and more capable Ford Fiesta ST, so it's a hard sell for driving enthusiasts.