The Vauxhall Adam isn't the best city car if you want the lowest running costs. No version can manage more than 60mpg fuel economy, which places the Adam well behind competitors such as the Fiat 500, which has both petrol and diesel engines capable of more than 70mpg.

Although it’s not surprising that the smallest 1.0-litre engine is the cheapest to run, unusually this is also the most powerful engine in the standard Adam range. Only the Adam S warm hatch is more powerful.

The 1.0-litre engine is able to return an average of 56 to 60.1mpg depending on the trim level and wheels you choose, while a BiK band of 20% should appeal to company-car drivers. But although that’s the best in the Adam range, some versions of the Vauxhall Corsa – with which the Adam shares many parts – are still cheaper to run. 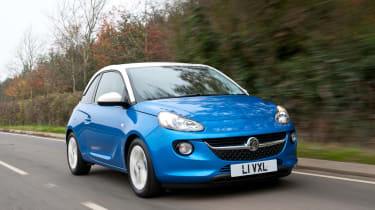 From here, the Vauxhall Adam’s engine range gets ever-more confusing, because fuel economy and CO2 emissions vary slightly depending on the size of alloy wheels fitted and whether or not the car has fuel-saving stop-start technology, which pauses the engine when you’re sitting in stationary traffic. In reality, you won’t notice much of a difference. So, deep breath…

There’s not much increase in fuel and tax bills if you step up to one of the 1.4-litre models. We recommend you do, if your budget can stretch to it, because the extra power makes the Adam a quieter, more relaxed car. Choose the 86bhp version and you’ll be faced with 52.3mpg and CO2 emissions of 125g/km. Oddly the figures are identical for the more powerful 99bhp version of the same engine.

Choose a 1.4-litre model with stop-start and fuel economy of 56.5mpg is claimed, with CO2 emissions of 118g/km. The 1.4-litre is also available with an automatic gearbox, but unlike many models, this doesn’t increase running costs.

After the first year's CO2-based road tax (generally included in the on-the-road price), all Vauxhall Adams cost £140 a year to tax.

The top-of-the-range Adam S is a performance-orientated model that uses a turbocharged 148bhp petrol engine, returning 47.9mpg and emitting 139g/km of CO2 for a 26% BiK band.

The Adam 1.2-litre falls into insurance group three, while the 86bhp 1.4-litre is in group six. Choose the more powerful 1.4-litre model and the insurance rating goes up to group eight or nine depending on the exact trim level you choose. The 1.0-litre engine attracts the biggest bills in the standard model range due to its group 10 rating. The sporty Adam S is in group 15, making it the costliest of all Adams to insure.

Vauxhall’s warranties are no better than average. That means the Adam has three-year/60,000-mile cover – although there’s no mileage limit in the first year.

The Vauxhall Adam has longer service intervals than average. It only needs to see the inside of a dealership every 20,000 miles or 12 months, whichever comes sooner. Choose to add the Vauxhall Care package for around £20 per month (or one lump sum) and you'll get the first three services, three years of roadside assistance and the first MOT, making it easy to budget for motoring expenses.