The Vauxhall Corsa VXR’s engine has plenty of thrust on tap, while optional Performance Pack only adds to thrills

Driving entertainment should be paramount when you’re behind the wheel of a hot hatchback – racy exterior looks should be matched by equally spirited performance on the road. Fortunately, the Corsa VXR delivers on that promise.

The car’s engine is a corker, providing plenty of punch whenever you need it and feeling much improved over the similar engine found in its predecessor. The Corsa VXR has a stiffer suspension set-up compared to the regular Corsa’s and this shows when you hit a rough road.

It can be quite crashy when driving over potholes and it seems to bounce between bumps. The firmer suspension does, however, make it much more composed on smooth, twisting country roads. If you’re a fan of the odd track day, the Corsa VXR is a great choice. 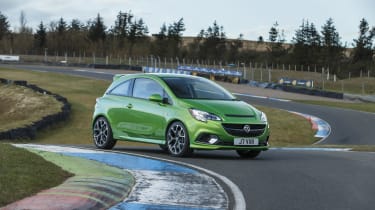 The steering is sharp and direct when you want to throw the car into a corner and there’s plenty of grip available to give you the confidence to push hard. The UK-spec Corsa also gets some tweaks to better cope with our roads.

We tested a Corsa VXR with the optional Performance Pack, which adds stronger Brembo brakes and a limited-slip differential. The extra stopping power of the brakes means a sharper response and further boosts your confidence in making use of the car’s power, while the clever differential helps the hot hatchback grip around tight bends for longer.

The new Vauxhall Corsa VXR is available with only one engine – a 1.6-litre turbocharged petrol that produces 202bhp. This launches the hot hatchback from 0-62mph in 6.5 seconds and is more powerful than the 180bhp 1.6-litre engine used in the Ford Fiesta ST.

When provoked, the engine responds eagerly. The power on tap is also more accessible more of the time than in the previous VXR and the turbocharger also has an overboost function that makes the acceleration more thrilling.

However, the small engine does tend to hesitate for just a moment while the turbocharger spools up to the right boost level. This is why the Corsa VXR doesn’t feel quite as urgent as the Fiesta ST, despite having more power.