The Corsa VXR features a near-identical cabin to its non-VXR sibling, so there are big improvements to refinement and build quality throughout. The VXR also comes with part-leather Recaro sports seats as standard, which means the only major issue with the standard current Corsa – its cheap-feeling seats – has been resolved. The Recaros are comfortable and supportive, while their leather trim adds to the overall sense of luxury.

The Corsa VXR’s stiff suspension is a characteristic that’s all too common in modern performance cars – it provides a planted and assured driving feel, but when you’re not driving ‘on the edge’ comfort is compromised. Tyre roar can be a pain if the Performance Pack is added, as its massive 18-inch alloy wheels make driving at speed uncomfortably noisy.

Durable materials have been used throughout the dashboard and the button layout is practical and well thought-out. Decent interior refinement means the Corsa now has one of the best dashboards in its class. 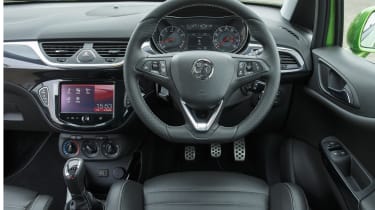 The addition of VXR details such as revised instruments, aluminium pedals and VXR badging ensures you won’t forget what you’re driving. The Corsa VXR also features Vauxhall’s IntelliLink infotainment system as standard. The large screen and bright graphics further boost the upmarket feel of the cabin.

The Corsa VXR has a similar amount of standard equipment as the Ford Fiesta ST-2. It features the previously mentioned Recaro part-leather sports seats, a heated windscreen, the IntelliLink infotainment system (which has DAB digital radio and Bluetooth), air-conditioning and cruise control.

The most notable optional extra is the Performance Pack, which costs around £2,400. That gets you 18-inch alloy wheels (compared to the standard 17-inch ones), a set of Brembo brakes and a limited-slip differential from Drexler Motorsport. This pack is worth its weight in gold thanks to that differential, which ensures the Corsa VXR feels very planted on the road.

Other options include a panoramic sunroof, front and rear parking sensors and the Technical Pack, which adds safety technology such as traffic-sign recognition, lane-departure warning and a rear-view camera.

The basic colour option is Flame Red, seen on various other Vauxhall models, but the Corsa VXR can also be finished in metallic colours such as Shiny Rock (grey), Carbon Flash (black) and Summit White, along with pearlescent shades Lime Green and Flash Blue. The Corsa VXR looks particularly good in the grey or – if you want to stand out – intense blue.