Given that this is a performance car, Vauxhall probably wasn’t thinking about running too much when creating it, and they’re probably fairly low down the priority lists of potential buyers, too. However, with the latest regular Corsa hatchback being even cheaper to run than its predecessor, the hot-hatchback VXR version should also demonstrate improved economy figures.

At least the purchase price is affordable: at around £18,000, the Corsa VXR is better value than the Fiesta ST on paper. And given that the VXR is only around £3,500 more expensive than a mid-range non-VXR Corsa, it’s also decent value for money within the Vauxhall brand.

The official fuel economy figure for the VXR’s 1.6-litre turbocharged petrol engine is 37.7mpg, while CO2 emissions are a heady 174g/km. These numbers aren’t exactly bad, but they aren’t going to win the Corsa VXR any awards for efficiency, either. The nature of this car means drivers are most likely going to be heavier-footed than normal, too. Our test drive saw a real-world economy figure of 24mpg and that CO2 figure means the Corsa VXR will set you back £205 a year in road tax. 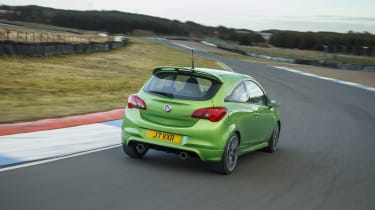 Compared to its rivals, the Corsa fares poorly in this area. Its main competitors, the Ford Fiesta ST and MINI Cooper S, have claimed mpg figures of around 47.9mpg, while the VW Polo GTI returns a similar 47.1mpg.

Vauxhall offers an industry-standard three-year/60,000-mile warranty. Also thrown in is Vauxhall Assistance, a roadside breakdown and recovery service provided by Vauxhall and the AA.

The Corsa VXR’s servicing schedule is every 20,000 miles or once a year, whichever comes first.