When the original Vauxhall Zafira was launched in 1999, its individually flat-folding seats were a real game-changer. Today, such flexibility is expected from any good MPV, but the Zafira Tourer seats are among the few that can be collapsed genuinely flat in a matter of seconds. 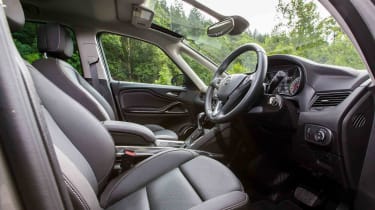 The Zafira Tourer is a large car, so it’s a good job front and rear parking sensors are fitted on all Zafira Tourer models. However, as in its rivals, the two extra seats that pop up from under the boot floor are a bit cramped, so they’re best reserved for children or smaller adults.

The first and second-row seats offer plenty of space for everyone except the occupant of the central seat in the second row, who has to straddle a lump in the floor. That seat is narrow, too, but thanks to the flexible seatbelt buckles here, it’s still possible to fit some models of child seat three-abreast. Unlike most rivals, ISOFIX points are on the two outer second-row seats only.

Each second-row seat can slide forwards and backwards independently to increase rear legroom or boot space depending on your needs, and tilting them forward for access to the very back is fairly straightforward.

Placing little ones in the car is made easier by the large rear doors, and tots benefit from an unusual, clever touch: a drinks holder located above the door pocket that puts bottles within reach of small toddlers who are restricted by tight harnesses.

On the whole, however, standard cabin storage falls behind many MPVs, with few clever features other than FlexRail system on SE and Elite models, which allows you to interchange different types of storage unit. 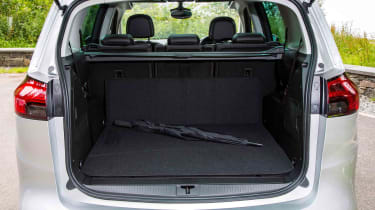 Many families will only use the third-row seats occasionally and, when these are folded, the boot is very generous at 710 litres. Even with the third-row seats in use, there’s enough space behind for a slim-folding buggy and a few bags of supermarket shopping.