Vauxhall's performance in our 2017 Driver Power owner satisfaction survey was decidedly lacklustre – it finished 23rd out of 27 brands. Although the Zafira Tourer didn't feature individually, Vauxhall owners generally rated their cars as adequate, rather than excelling or failing in any specific area. Reliability was rated 20th overall, with 10.6% of owners reporting at least one fault within the first 12 months. 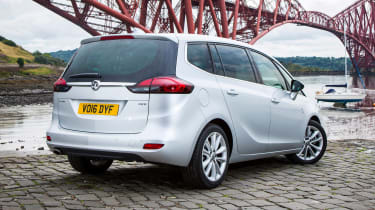 Every Vauxhall Zafira Tourer includes electronic stability control, traction control and six airbags (including curtain bags that cover the second-row windows) as standard. It also scored the maximum five stars when it was crash-tested by Euro NCAP in 2011.

That result included a 94% rating for adult occupant protection and 83% for child protection – an impressive tally compared to the Citroen Grand C4 Picasso (tested more recently) and older MPVs such as the Peugeot 5008 and Ford S-MAX. The Zafira’s adaptive lighting, blind-spot and lane-keeping assistance systems were also commended by the safety body, though these are all extra-cost options.

The fact that ISOFIX points are fitted only to the outer second-row seats is disappointing, given that most seven-seaters fit them to the centre seat as well, thus catering for larger young families and the type of buyer most likely to choose a seven-seat people carrier.