Quick and smooth – perfect around town 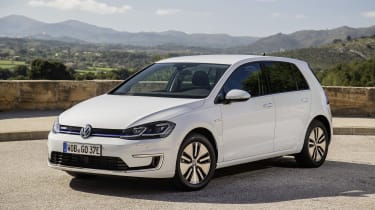 The familiar looks of the Volkswagen e-Golf are matched by the way it drives. In fact, when driving gently on country roads, the e-Golf doesn’t feel significantly different to the regular Golf. Other than stiffening to cope with the extra weight, Volkswagen made no big changes to its suspension.

Only when you increase the pace does the e-Golf start to show the effect of the 318kg ballast its lithium power pack introduces. Some of the nimble, agile feel that petrol Golfs boast is sacrificed, although there's still plenty of grip for enthusiastic cornering and an XDS electronic differential helps to disguise some of the weight the e-Golf has gained. Passengers will be disappointed that the electric model's stiffened suspension tarnishes the Golf's usually plush ride quality. 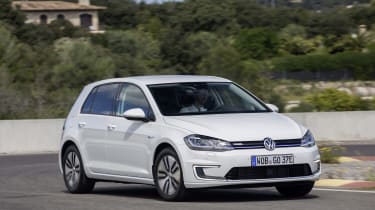 The higher-capacity battery introduced during 2017 was joined by a more powerful 134bhp electric motor, which reduced the e-Golf’s 0-62mph time from 10.4 to 9.6 seconds. While that figure doesn’t necessarily impress on paper, the instant way the car responds means it feels rather quicker, and the initial blast from 0-37mph takes less time than a Volkswagen Golf GTI. This is a spritely feeling car, then, and doesn’t seem out of its depth on motorways, although the BMW i3 is rather more muscular.

The e-Golf has three driving modes – Normal, Eco and Eco Plus – with the power output decreasing with each step to maximise range. One of the few things that reminds you you’re not in a petrol or diesel car is the e-Golf’s regenerative braking system, which converts waste energy into electrical charge when you decelerate. The system has four settings – D1, D2, D3 and D4 – that alter the severity regenerative brake force applied.

In practice, the effect doesn't feel as pronounced as in the Nissan Leaf or Renault ZOE, but it’s still possible to drive the car without ever having to use the brakes, depending on the setting you choose.